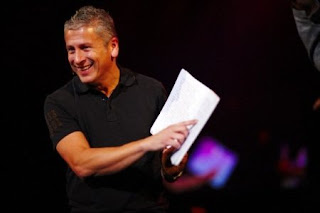 Someone in Barack Obama's organization truly needs to be taken to the woodshed for a thorough thrashing as it turns out that Louie Giglio (pictured above) - who for a short time was to present the Inaugural benediction - not only has a history of anti-gay preaching but also is tied to a church in Uganda leading the push to enact draconian anti-gay legislation in the form of the "Kill the Gays" bill.  One has to wonder how the Obama camp could be so utterly in competent in selecting Giglio - especially after the LGBT vote helped ensure Obama's reelection.  It's all unbelievable.  Talk to Action has a lengthy piece that provides much more on Giglio's ties to this murderous anti-gay efforts.  Here are highlights:

Like Warren, Giglio has ties to the epicenter of anti-LGBTI activism in Uganda. For Warren, it was his partnership with Martin Ssempa and involvement with The Fellowship. For Giglio, it is an association with a key church that supports an eliminationist bill, looming before Uganda's parliament since 2009, that would virtually legislate Uganda's gay community out of existence.

How could it have happened that such a pastor could have been picked to sanctify the inauguration of a president who has taken a bold, if belated stance in support of gay rights? A few voices familiar with the intersection of religious right and politics have some thoughts on the Giglio fiasco [1, 2.] But back to Giglio:

On January 9th, 2012, a Thinkprogress report on conservative evangelical megachurch pastor Louie Giglio prompted a firestorm in activist human rights media and by the next day Giglio had been removed from the inaugural program. As Thinkprogress described, in a 1990s sermon pastor Giglio had,


"advocated for dangerous "ex-gay" therapy for gay and lesbian people, referenced a biblical passage often interpreted to require gay people be executed, and impelled Christians to "firmly respond to the aggressive agenda" and prevent the "homosexual lifestyle" from becoming accepted in society."

[H]is ministry has also, since 2008 (when the Watoto choir sang at Giglio's Passion conference in Kampala) or earlier, had an institutional relationship with a church in the vanguard of Uganda's mounting crusade against LGBTI rights, the Watoto Christian Church -- whose church elder Stephen Langa has played a central role in agitating for the so-called "Kill the Gays" bill that has loomed before Uganda's parliament since 2009.

One speaker, Scott Lively, also claimed that a subset of "butch" homosexuals was responsible for the Holocaust and was inclined towards committing acts of mass violence and even genocide. Lively claimed Hitler was in the alleged subset.

While it would be hard to make a case that pastor Giglio bears any direct responsibility for the Uganda Anti Homosexuality Bill, his association with (and promotion of) the Watoto Christian Church raises serious questions.

Indeed, Giglio seems to have so utterly ignored the issue that even as the Watoto Church was emerging as a hotbed of anti-gay rights activism, the public relations apparatus of Giglio's rapidly growing "Passion" conference, whose 501(c)(3) nonprofit parent ministry was in 2010 was funded with over $12 million dollars, was presenting the Watoto church as an exemplar of philanthropic activism, for the church's efforts to help orphaned Ugandan children.

The development of these parallel tracks, with Giglio's Passion conferences ramping up in tandem with growing anti-LGBTI activism from the Watoto church, and rising persecution of gay Ugandans, is jarring.

While the Watoto Church has not been among the noisiest of boosters of the Museveni regime among Uganda's born-again churches, that have provided a key block of political support for Ugandan President Yoweri Museveni over the past decade, nonetheless the church helps reinforce a predominant narrative, marketed aggressively to American evangelicals, that by omission exonerates the Museveni regime which, by many accounts, is among the most egregious violators of human rights on the African continent.


Given Giglio's foul ties, one has to wonder why the Obama staffers did  try for a triple play and invite a former Nazi from WWII and a former militant segregationist as speakers as well.   Giglio and those like him who traffic in hate and bigotry need to be pushed to the periphery of society and have no place at a presidential inaugural event.
Posted by Michael-in-Norfolk at Saturday, January 12, 2013