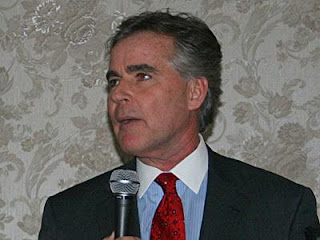 If one wants to see what happens when someone tries to move the Republican Party toward modernity and a departure from obsession with God, guns, racism and gay bashing, one need look no farther than Illinois where state GOP Chairman Pat Brady is facing growing calls for his resignation because he has urged Illinois Republicans to vote for marriage equality.   Like Newt Gingrich - who I personally loathe - Brady sees the future and understands that longer term, the GOP's incessant anti-gay animus is going to harm the GOP's viability.  Outside of knuckle dragging Christofascist circles, more and more Americans now support same sex marriage, particularly younger voters who are replacing the elderly bigots who continue to embrace hate and bigotry not only against gays but minorities in general.  WBEZ has coverage on the raging fire storm.  Here are highlights:

The head of Illinois’ beleaguered Republican Party is staring down a revolt from some state party bosses after he bucked the official GOP line last week and urged state lawmakers to approve same-sex marriage.

State GOP Chairman Pat Brady faces growing calls for his resignation, at a time when some Illinois Republicans are rethinking the party’s image and stance on social issues, following a dismal showing in November’s elections.

Conservative groups and activists pounced on Brady shortly after he released a statement last week offering his “full support” of a bill before the General Assembly that would legalize same-sex marriage.

But now the public demands for his ouster are coming from party leaders themselves.
“Pat Brady is a total disgrace,” said Bobbie Peterson, a Republican state central committeewoman from Beecher, Ill.

“He’s a pretty face for TV. He can speak well. Period,” Peterson said. “But what’s coming out of his mouth is not what the Illinois Republican party is about.”

Brady acknowledges he didn’t reach out to committeemen before speaking out in favor of gay marriage. But he told WBEZ his views are his own, and he spoke up while lawmakers were debating the issue in Springfield. Brady calls the same-sex marriage ban Illinois' “last condoned discrimination."

“If people want to throw me out because I took a stand on an issue of discrimination [as] the chairman of the Republican Party, the party founded by Abraham Lincoln, then that’s – that’s up to them and they’re free to do it,” Brady said. “But I’m not backing down.”

Whatever the outcome, Brady’s timing could not have been worse, according to several party bosses. Brady chimed in just as lawmakers were trying to focus on fiscal issues, such as pension reform, instead of same-sex marriage, said State Sen. Dave Syverson, R-Rockford, who sits on the Republican State Central Committee.

“His role as chairman should be to concentrate on uniting the party, and not dividing the party,” Syverson said, though he doesn't go so far as to ask Brady to step down.

The flap over Brady’s comments comes as many state Republicans are still digesting their rout in the Nov. 6 elections, when the GOP lost its majority in the Illinois congressional delegation, and Democrats won supermajorities in both chambers of the General Assembly.

That has some politicians considering a move to the center on some social issues such as same-sex marriage, said Republican pollster Gregg Durham.

“What some voters perceive as extremism on some of the social issues certainly cost votes in November and will cost votes in the future,” Durham said, referring to young voters and suburban women, two key voting blocs. “And there’s a lot of candidates right now doing soul-searching, looking at some of these issues to say, ‘Where are we really on this stuff?’”

The irony is that some of my former GOP compatriots from the past accuse me of being "angry" - obviously, it is they who are angry - angry that white male and Christianist  privilege is dying - and I can only surmise that they are looking in the mirror when they make these attacks on me.  They can whine and attack me all they want, but I will go on calling out their lies and hypocrisy.