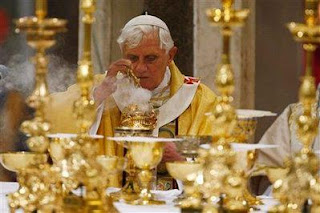 Sometimes it seems as if the Vatican truly struggles to find things sufficiently offensive with which to compare gay civil law marriage.   From the Vatican's perspective, it is impossible to sow enough anti-gay animus even as lip service is given to opposing violence against gays.  Like so many of the "godly Christian" crowd, the Vatican has blood on its hands for the needless deaths of gays at the hands of gay bashers not to mention suicides encouraged by the constant disparagement and bullying made acceptable by the pious folk.  In its latest effort to paint gays as a threat to civilization, the Vatican Newspaper has compared the passage of marriage equality with the evils of communism.  The Vatican newspaper, somehow never seems to mention the sex abuse scandal that is continuing to explode around the world or the role played by the Church hierarchy and the current Pope in enabling and covering up for predator priests.  Recognizing the love of committed same sex couples threatens civilization while the rape of children and youth is fine unless the media finds out about it.  The State Journal-Register looks at the Vatican's latest hypocrisy laden anti-gay offensive.  Here are highlights:

VATICAN CITY — Faced with recent setbacks in the United States and in Europe, the Catholic Church has intensified its increasingly uphill battle against gay marriage.

The latest salvo came with a front-page article in the Vatican’s semiofficial newspaper, L’Osservatore Romano.  Historian Lucetta Scaraffia compared proponents of gay marriage, with their championing of “marriage equality,” to 20th-century communists who wooed millions with their promise of perfect social and economical equality.  For her, the idea of gay marriage is a product of the same “egalitarian utopia that did so much damage during the 20th century … deceiving humanity as socialism did in the past.”

In November, voters approved gay marriage in three U.S. states, while Spain’s Constitutional Court rejected a bid to repeal the country’s same-sex marriage law. France and Britain are in the process of legalizing gay marriage.   The church has lobbied hard in all these countries. But it has also tried to present its position in a nonreligious way, as a defense of traditional family that can be embraced by believers and nonbelievers alike.

In her L’ Osservatore Romano article, Scaraffia echoed and developed Benedict’s argument. To equate a traditional marriage between a man and a woman with a union between homosexuals amounts to a “negation of truth,” which would undermine “one of the basic structures of human society, family,” she wrote.

In the long run, she concluded, societies will end up paying “a very high price” for destroying family, “as it happened in the past with the attempts to create a complete social and economical equality.”


Fortunately, as the article notes, some are calling out the Vatican for its lies and hypocrisy:

Marianne Duddy-Burke, executive director of DignityUSA, agreed that “marriage and family are sacred institutions that deserve the support of both civil and religious communities.” But, she added, “these institutions are not limited by the sexual orientations of their members. Love and commitment transcend gender.”

The Vatican’s arguments against gay marriage, she said, are based on “patently false beliefs about human nature” and represent “a cruel and un-Christian attempt to incite fear and division.”

Would that more civil and governmental authorities had the courage to take on the church and conduct investigations into the Church's criminal conspiracy to obstruct justice and protect sexual predators.  The successful prosecution and conviction of bishops and cardinals would do wonders in educating the public to the Church hierarchy's utter moral bankruptcy.
Posted by Michael-in-Norfolk at Sunday, January 06, 2013