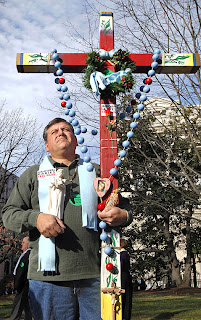 In my January column in VEER Magazine (it will be on news stands January 15th) I look at what to expect from the Republican Party of Virginia during the 2013 session of the Virginia General Assembly which convened today.   My prediction was not positive in terms of the Virginia GOP which is tantamount to an arm of The Family Foundation.   An article in the Virginian Pilot likewise predicts a reprise of last year's far right batshitery which made Virginia the laughing stock of the country, if not the world.  Here are excerpts:

The General Assembly opening today served notice that 2013 may offer a repeat of last year’s high-profile fights on abortion rights that are still fresh in the memories of legislature observers.


This year, several Republicans have filed bills to curb abortions in some circumstances by ending state support for abortion procedures of poor women who are going to have a deformed baby, making it criminal for doctors to perform abortions based on gender, and limiting contraception coverage.

Democrats, meanwhile, are vowing to fight those measures and offering their own bills to reverse recently enacted policies that require women to undergo a pre-abortion ultrasound and make abortion clinics meet hospital-like building standards.

Norfolk Sen. Ralph Northam, a physician [and Democrat], is offering bills to repeal the ultrasound law and protect doctors from being forced to do medically unnecessary procedures in an effort to return such decisions to women and their doctors.Among the anti-abortion bills Democrats hope to defeat this year is legislation from Del. Bob Marshall, R-Prince William County, to criminalize sex-selective abortions and to free businesses from providing contraceptive coverage.

Another measure they aim to spike is Louisa County Sen. Tom Garrett’s SB 862, which would eliminate state support for poor women to have an abortion when a doctor concludes the fetus would be born with an incapacitating disability.


Posted by Michael-in-Norfolk at Wednesday, January 09, 2013