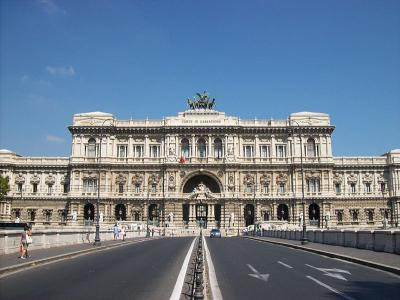 In yet another blow to the Catholic Church's anti-gay agenda, the Italian Supreme Court ruled literally in the Vatican's own back yard that same sex parents are as good as heterosexual parents.  One can just imagine the gnashing of teeth amongst the bitter old men in dresses at the Vatican which issued a statement condemning the Court's ruling.   Italy's highest court handed down the ruling in a custody dispute where a heterosexual father had brought a case against his former partner who was now living with a woman.  Of note was the Court's recognition of the reality that there is zero scientific evidence that heterosexual parenting of children is superior to that provided in same sex couple households.  Gay Star News has details.  These are highlights:

The Supreme Court of Italy has ruled that same sex couples can be as good parents as opposite sex couples.

According to APF the court made the ruling on Friday, stating ‘There is no scientific certainty or concrete evidence but only prejudice [to say that] living in a homosexual family is damaging for the growth of a child.’

The ruling was on a custody dispute where a heterosexual father had brought a case against his former partner who was now living with a woman.

The ruling was welcomed by Italian LGBT rights group Arcigay.  ‘Once again an Italian court [has found in favor of a] family made up of people of the same sex,’ said Arcigay president Flavio Romans.  ‘The Supreme Court reiterates … that a child grows up in a family of a mum and mum or dad and dad in exactly the same way as a child growing up in a family men and women does.’

As noted, the Vatican is REALLY pissed off with the Court and issued a disingenuous, spittle flecked statement reported by the Miami Herald:

The Vatican is pressing its opposition to gay marriage, insisting Saturday that children should grow up with a father and a mother after Italy's high court upheld a lower court ruling and granted custody of a child to his gay mother.

In its decision Friday, the Court of Cassation said there was no "scientific certainty or experience-based data" to support the father's claims that the child's development was being damaged by living with his mother and her female partner. Such an argument was "mere prejudice," the court said.

On Saturday, bioethicist Adriano Pessina sought to downplay the significance of the ruling, writing in the Vatican newspaper L'Osservatore Romano that children often grow up in less-than-ideal circumstances and turn out fine.

He echoed the pope's recent insistence that no one has a "right" to a child and that children should be raised by a mother and father.  "Monogamous families constitute the ideal place to learn the significance of human relations and represent the social and anthropological environment in which the best type of growth is possible," he wrote.

Of course, if the Vatican really gave a rat's ass about children, there would be a thorough house cleaning of the priesthood and the Church hierarchy of every predator priest and every bishop and cardinal who aided, abetted or covered up for child rapists (yes, I know - that means Benedict XVI would need to be thrown off the throne of St. Peter for his own cover up activities).  Until such a house cleaning happens, the Vatican's shrieks and moans are simply hypocrisy of the highest order.
ttp://miamiherald.typepad.com/gaysouthflorida/2013/01/vatican-criticizes-court-ruling-on-gays-children.html#storylink=cpy
Indeed, the only argument against gay parenting - like the arguments against same sex marriage - boil down to one thing: religious based bigotry, hate and prejudice.