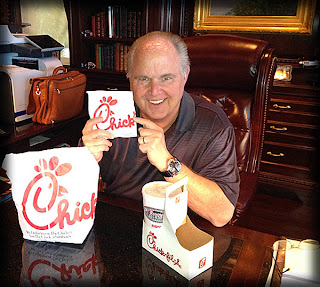 Leave it to Rush Limbaugh - that champion of the "sanctity of marriage" who is thrice divorced and on marriage number 4 - to attack gay marriage and liken the recognition of gay marriage to the "normalization of pedophilia."    Funny how one does not hear Limbaugh attacking the Catholic Church hierarchy for its obstruction of justice and world wide criminal conspiracy to enable and protect child rapists within the Catholic clergy.  It would seem that if any institution has "normalized" pedophilia it is the Vatican and Church hierarchy.  But then Rush's logic and reasoning may be diminished given the way he's fried his brain with Oxycontin and other drugs.  Politico looks at Limbaugh's latest delusional case of diarrhea of the mouth.  Here are some excerpts:


Rush Limbaugh said Monday that there is a movement to “normalize pedophilia,” and referenced the push for same sex marriage while also discussing the Jimmy Savile and Jerry Sandusky child abuse scandals.

“There is a movement on to normalize pedophilia, and I guarantee you your reaction to that is probably much the same as your reaction when you first heard about gay marriage,” the conservative commentator said on his radio program Monday, according to a show transcript. “What has happened to gay marriage? It’s become normal — and in fact, with certain people in certain demographics it’s the most important issue in terms of who they vote for.”


He continued: “So don’t pooh-pooh. There’s a movement to normalize pedophilia. Don’t pooh-pooh it. The people behind it are serious, and you know the left as well as I do. They glom onto something and they don’t let go.”

Limbaugh was discussing an article written by Jon Henley of the United Kingdom newspaper The Guardian on Jan. 2. In the piece, Henley writes about the late-British television host Savile — who authorities say molested hundreds of young people.

Referring to Henley’s column, Limbaugh said: “They make the case that kids enjoy it, adults enjoy it; what’s wrong with a little love? The same things that were said about gay marriage. Look at the Elmo story, the puppeteer at PBS. Three or four young people, kids, were hit on by that puppeteer. Look how little attention that story got. In fact, that story was laughed off. It wasn’t a big deal at all.”

“Can you imagine if Jerry Sandusky had had this information at his trial? What do you think the reaction would be to Jerry Sandusky’s defense saying, ‘Hey, look, it’s normal. The kids love it, he loved it, nobody was hurt. And in fact, it’s just a different sexual orientation?’” Limbaugh said.