The Passing of a Generation 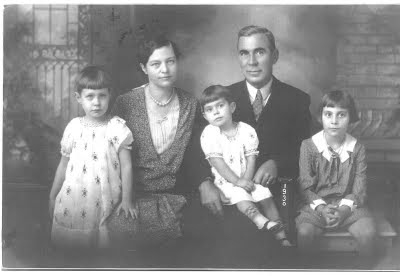 Yesterday I received the news that the last of my late mother's sisters has died (my aunt is pictured at left in the family passport photo from 1930 - my mother is the youngest child in the center).  There is no one left now who remembers first hand the remarkable and unusual lives my mother's parents and that she and her sisters experienced.  Like my mother, my aunt was born in Puerta Castilla, Honduras, which at the time was a model town built by United Fruit Company ("UFC") which thrived until a banana blight struck after my mothers family had moved to Puerto Armuelles, Panama.   My grandfather was the head of the hospitals in locations and as such was among the most important men in both places.  Despite United Fruit Company's many faults during the years that it was the de facto ruler of much of Central America, it did one thing right: the medical department treated everyone in the towns regardless of whether they were employed by the company.  As a result, medical care was significantly improved.

Today, Puerto Castilla is a container ship port and little remains of the 1920's town (pictured below at upper right) save and except for the former hospital building.  The structure in the upper left of the photo was the UFC built and operated school where my mother and her sisters began their education - in Spanish. 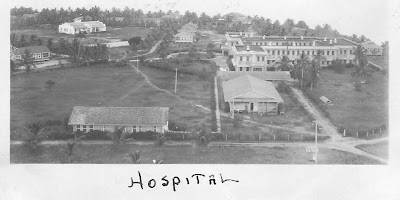 Despite my entreaties that they write down their memories of this time that seems so remote, neither my mother or her sisters did so.  Hence my effort in some small way to keep the story alive via this blog and the assistance I gave three years ago to a Costa Rican publication that did a piece on the UFC medical department.   Here are some brief excerpts from my aunts obituary:

Catharine "Ann" Lopushinsky was born June 3, 1925, in Puerto Castilla, Honduras, to Dr. Bruce M. and Mary Azelie Hibben Phelps. Her early childhood years were spent in Honduras with her family. While she lived there, she learned to speak Spanish fluently. Ann attended Marymount Boarding School for Girls in NYC for grades 4-8. She later settled in Lowville, NY, with her family, where she finished her high school years.

During the '70s, '80s and into the '90s, she was an active member of the Red Cross Disaster Action Team. She responded at all hours of the day and night to fire calls in Syracuse, aiding those who lost their homes and needed assistance in housing, clothing and food. She also participated in Red Cross National Disaster Relief efforts. The longest one was in Puerto Rico for three months, during the mudslides. She stayed on there because she could speak Spanish with the residents and helped them to receive the aid that they needed.

Throughout her life, Ann loved gardening. She maintained extensive gardens in Liverpool and Syracuse, including an English garden, and belonged to the Rose Society. Her most favorite flower of all was the Hybrid Tea Rose.

Ann was predeceased by her beloved husband, Michael, and her sisters, Mary Alice Isachsen and Marion Hibben Hamar.


May they all rest in peace.  Oh, an in a bit of irony, my late sister's son is currently in the Peace Corps - in Panama.

Posted by Michael-in-Norfolk at Tuesday, January 08, 2013