Is Chris Christie the GOP's Savior? 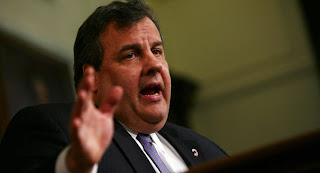 While I disagree with a number of Chris Christie's actions and positions - e.g., his veto of same sex marriage legislation passed by the New Jersey legislature - compared to most current day Republican's he is a breath of fresh air and seems committed to doing what needs to be done rather than kissing the bigoted and mean spirited asses of the Christofascist/Tea Party base of the GOP.  Given his failure to tow the line, the question becomes whether he can become the savior of the increasingly insane GOP or whether instead, the GOP will ultimately exile him.  A piece in the Washington Post looks at this issue.  Here are highlights:

A pair of polls out this week shows the dire state the Republican Party finds itself in — and a way out of the wilderness, should Republicans choose to take it.

Poll No. 1: Rasmussen Reports found that views of the tea party — the wing of Republicanism that dominates party primaries and therefore the congressional Republican caucuses — at a new low. Only 8 percent of likely voters considered themselves tea-party members, down from 24 percent in 2010. According to Rasmussen (which tends to have a pro-Republican bias), unfavorable views of the movement topped favorable views, 49 percent to 30 percent.

Poll No. 2: Fairleigh Dickinson University found that 73 percent of New Jersey voters approved of the job their Republican governor, Chris Christie, is doing — near his all-time high. Even 62 percent of Democrats approve of Christie, as well as 69 percent of racial minorities and 70 percent of women. The top would-be challenger to Christie in November’s gubernatorial election is trailing him by 33 percentage points.

[T]he tea party’s record lows and Christie’s record highs tell a larger story: Americans are crying out for an end to ideological warfare.

That has developed into Christie’s signature in New Jersey. He began his term promising tax cuts and fighting with the teachers union over tenure, pay and education reforms, but he now preaches reconciliation — a recurring theme in his State of the State address Tuesday afternoon.

More than three-quarters of Americans believe that politics in Washington is causing “serious harm to the United States,” according to a new Gallup poll — and they are correct to think so.  Christie lent his powerful voice to that sentiment last week when he condemned as “disgusting” the House Republicans’ decision not to take up a $60 billion Hurricane Sandy recovery bill because tea-party lawmakers considered it wasteful.

He unnerved fiscal conservatives by saying that the hurricane recovery would probably require higher taxes, because “there’s no magic money tree.” He came out against the National Rifle Association’s plan to have gun-wielding guards in schools, saying, “You don’t want to make this an armed camp for kids.”

Earlier, after conservatives criticized his appointment of a Muslim judge, he took on these “bigots” for their “gaze of intolerance.” And on immigration, he called for an “orderly process” to legalize immigrants and he criticized those who “demagogue.”

Certainly, Christie is no liberal, but his State of the State speech was full of policy prescriptions that conservatives might label big government

“You see,” he told the legislators, “some things are above politics.”  It’s a lesson that could help the national Republican Party loosen the tea party’s death grip.