The Dictatorship of House Republicans 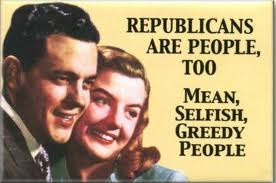 Right now the biggest threat to America isn't Al Qaeda and would be Islamic terrorists.  Rather, it is the Republican extremists in the House of Representatives who continue to hold the nation hostage and display a continued willingness to harm the lives and finances of a majority of Americans in order to pander to the ugliest elements of the increasingly, racist, religious extremist, and mentally unhinged GOP base.  Sadly, because of the successful gerrymandering of congressional districts in GOP controlled state legislatures like Virginia's it will be difficult to unseat many of these domestic saboteurs for years to come.  An editorial in the New York Times looks at this disturbing threat to democracy and the future of the country.  Here are excerpts:

The only reason that income taxes on 99 percent of Americans did not go up this month was that Speaker John Boehner briefly broke with an iron rule of Republican control over the House. He allowed the fiscal-cliff deal to be put to a full vote of the House even though a strong majority of Republicans opposed it.


[U]nder the majority-of-the-majority rule in the House, Democrats are completely cut out of the governing process, not even given a chance to vote unless Republicans have decided to pass something. Since 2010, there have been enough extremist Republicans in the caucus to block consideration of most of the bills requested by the White House or sent over from the Senate. If President Obama is for something, it’s a safe bet that most House Republicans are against it, and thus won’t bring it up.

That’s why the House never took a vote on the Senate’s latest five-year farm bill. Or the Violence Against Women Act. Or a full six-year transportation bill. Republican opposition prevented consideration in the last term of the Senate’s $60 billion in providing relief from Hurricane Sandy; so far, the House has been willing to approve only a measly $9.7 billion. . . .

This anti-democratic tactic, now known as the “Hastert rule,” helped turn the chamber into a one-party institution that utterly silenced the minority. A post-9/11 intelligence reform bill, urgently sought by President George W. Bush, was bottled up by Mr. Hastert and his allies, who knew it would pass if Democrats were allowed to vote.

This was not a rule used by Democrats. Speaker Tom Foley allowed the North American Free Trade Agreement to pass in 1993 on mostly Republican votes, and when Nancy Pelosi took the job in 2007, she repudiated the Hastert rule, allowing both parties to vote together on legislation.

[I]f the country is to move forward on issues with widespread support — getting past the debt limit, immigration reform, gun control, and investments in education and infrastructure — he [John Boehner] will have to let the two parties vote together on a solution.

Candidly, I am not going to hold my breath.  Today's GOP puts partisan games and ass kissing extremist ahead of the country's best interests and certainly the best interests of the majority of American families.  It's yet another reason I can not support any Republican.
Posted by Michael-in-Norfolk at Thursday, January 10, 2013