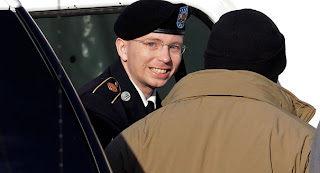 It has been a while since this blog has addressed the issue of Bradley Manning's military trial for purportedly releasing to Wilileaks among other things information on war crimes committed by American service members in Afghanistan.  Disturbingly, the U. S. Military and the Obama White House have been far more concerned about the materials leaked by Manning that confirmed U.S. military misdeeds - which seem to have had questionable, if any, real negative impacts on the military and the State Department - than the horrors of atrocities committed by U. S. Service members.  Manning, who is gay and who some have speculated was motivated in part by the thankfully now dead DADT policy, has been submitted to inhumane treatment while incarcerated prior to his trial.  Now, the judge in Manning's case has awarded Manning a credit for the horrific treatment he had to endure.  Here are highlights from an article in Politico:

The military illegally punished alleged WikiLeaks source Bradley Manning by keeping him in stricter conditions than were necessary during much of the nearly nine months he spent in a Marine Corps brig, a military judge ruled Tuesday.

Army Col. Denise Lind granted the Army private nearly four months credit off any sentence he may receive for allegedly sending hundreds of thousands of military reports and diplomatic cables to the pro-transparency organization.

The decision is a significant victory for Manning’s defense and a vindication for human rights groups that complained that the intelligence analyst was being treated unfairly. The ruling also runs counter to President Barack Obama’s statement at a March 2011 news conference that Manning’s treatment at the brig was “appropriate.”

Lind calculated most of the credit based on three periods when Manning was held on “suicide risk” or “prevention of injury” watch after psychiatrists opined that such treatment was not necessary. The judge ruled that it was “excessive” to keep him on that status, which required frequent checks by guards, limits to his clothing, and sometimes led to him sleeping wearing nothing but an anti-suicide blanket.


“At some point, continuing POI [prevention of injury watch] of the recommendations over mental health professionals becomes excessive, absent a change in circumstances,” Lind said in her lengthy ruling which she read from the bench Tuesday afternoon. She called her decision to award one 20-day credit “a very close call.”

The Fifth Amendment to the U.S. Constitution prohibits pre-trial punishment. In addition, a provision of military law bars use of confinement conditions ” more rigorous than the circumstances required to insure [a defendant’s] presence” at trial.

If convicted on the most serious charge he faces, aiding the enemy, Manning faces a potential sentence of up to life in prison. Other charges, such as violating the Espionage Act and theft of government property, could put Manning in jail for dozens of years.

[T]he Defense Department has refused to release written copies of the judge’s rulings, legal filings or transcripts of the court martial proceedings and Lind has said she does not have the authority to do so. Reading the decision aloud was the only way for the judge to effectively get her full rationale into the public domain.

The military’s highest appeals court is considering a legal challenge to the secrecy surrounding the court records. Such records are routinely available to the public in state and federal civilian courts.

Perhaps my views are tainted by my coming of age during the Vietnam era when the U.S. military fed the public and Congress a constant stream of lies that cost thousands of young Americans their lives - for nothing as it turned out - but I remain convinced that Bradley Manning's only real crime - if it is one - is to have shown the horrors being done in the name of America and the American public.  Neither the U.S. Military or the White House look kindly on having the truth exposed that shows that America is engaged in unconscionable and illegal conduct.
Posted by Michael-in-Norfolk at Tuesday, January 08, 2013