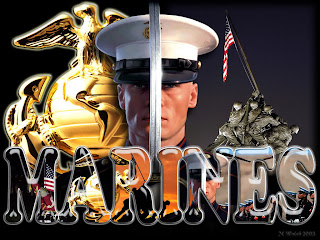 In somewhat of a surprising move, the U. S. Marine Corps has directed spouses clubs operating on its installations must either admit same-sex spouses or move off Marine Corps bases.  So far, none of the other branches of the U.S. military have taken such a direct and uncompromising position.  The Marine Corps ultimatum comes in the wake of the ongoing controversy within the Army's Fort Bragg Base in North Carolina where the officers' spouses club  denied admission to a same-sex spouse.  As readers may recall, before the repeal of DADT, the Marines were among the most vocal supporters of DADT.  Here are highlights from Federal News Radio:

The Marine Corps has advised its legal staff that spouses clubs operating on its installations must admit same-sex spouses if they wish to remain on the bases.  It's a step that the other service branches have not yet announced as they grapple with how to accommodate same-sex couples following repeal of the don't ask, don't tell policy that barred gays and lesbians from serving openly.

Underscoring the challenges, the Marines' legal advisory - obtained Wednesday by The Associated Press - refers to an ongoing controversy at the Army's Fort Bragg in North Carolina where the officers' spouses club has denied admission to a same-sex spouse.

The Marine Corps commandant's Staff Judge Advocate, in an e-mail to legal offices throughout the corps, said the Fort Bragg events had "caused quite a stir" and cautioned, "We do not want a story like this developing in our backyard."

The memo noted that spouses clubs and various other private institutions are allowed to operate on bases only if they adhere to a non-discrimination policy encompassing race, religion, gender, age, disability and national origin.  "We would interpret a spouses club's decision to exclude a same-sex spouse as sexual discrimination because the exclusion was based upon the spouse's sex," the memo said.

A Marine Corps spokesman, Capt. Eric Flanagan, said the Marines cannot directly control the actions of independent organizations such as spouses' clubs, but added, "We expect that all who are interested in supporting Marine Corps Family Readiness would be welcome to participate and will be treated with dignity and respect."

The Defense Department has not issued similar guidance covering all service branches, and for now is taking the stance that the Fort Bragg spouses club is conforming with the existing rules because the non-discrimination clause does not extend to sexual orientation.

I can just hear the shrieks and imagine the flying spittle among the professional Christian and Christofacscist organizations.  Nothing gives them more joy or buoys their self-congratulatory piety more than bashing gays and the less fortunate.