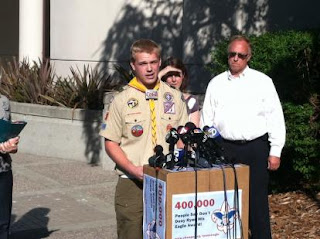 It's amazing that the most homophobic of organizations - e.g., the Boy Scouts of America ("BSA") and the Roman Catholic Church - both go out of their way to stigmatize and ostracize gays while going to great lengths and extreme levels of secrecy to protect and cover up for sexual predators.  The moral bankruptcy of such hypocrisy is breath taking.  And by again killing the grant of an Eagle Scout award to Ryan Andresen, BSA has again demonstrated that it puts persecuting gays ahead of its own purported principles of morality, not to mention the views of many donors who are ceasing donations.  GLAAD has details on this latest display of bigotry.  Here are some highlights:

Yesterday, 18 year-old Ryan Andresen and his family celebrated that he was one step closer to getting his Eagle award after an official Eagle Board of Review unanimously approved Ryan's Eagle application.

But Ryan's victory was short-lived, as Fenoglio, a paid employee of the BSA, reversed course and rejected the board's unanimously approved application -- an unprecedented action. Local Scout volunteers speculate that Fenoglio's decision was heavily influenced by BSA national.

"It's an unprecedented move," says Wahls. "It's clear that Fenoglio's reversal was forced by BSA national. He's a paid employee, and unfortunately, National exerts a lot of influence over their staff. His reversal, however, is most disappointing."

The Andresen family is devastated, but what hurts them more is that BSA national would rather soil the official Eagle application process and pit local paid staff against volunteer leaders, than allow a gay Boy Scout to be awarded an honor he's earned.

This marks the second time Ryan has been rejected by Scouting leaders he looks up to -- just because he's gay. To make matters worse, BSA Executives – the unelected, paid brass helming an organization that touts the principles of honesty and integrity -- continue to malign Ryan in the national media.

“The Eagle application was forwarded, by a volunteer, to the local council but it was not approved because this young man proactively stated that he does not agree to Scouting’s principle of ‘Duty to God’ and does not meet Scouting’s membership requirements. Therefore, he is not eligible to receive the rank of Eagle.”

Bonnie Hazarabedian, the District Advancement Chair who headed Ryan’s Eagle Board of Review, refutes that claim, however:

“Ryan did everything right in this process, with honor and honesty. He completed all of his requirements, he turned in his application along with the appropriate request for an appeal before an Eagle Board of Review, and he satisfied every member of the Board that he has earned the right to be recognized as an Eagle Scout. The Board reviewed all of Ryan’s scouting history, his advancement records, his Eagle project and his spiritual beliefs, and we are convinced that Ryan has more than demonstrated that he deserves the award.” (Emphasis added.)

In October 2012, Ryan’s mom launched a Change.org petition calling on local Boy Scout leaders to reject the BSA’s discriminatory anti-gay policy and to give Ryan the Eagle award he has earned. To date, the petition has more than 460,000 signatories.


Once again we see a display of the nastiness of the modern day Pharisees of the right.  They may congratulate themselves on the supposed piety and godliness, but in truth they are very foul individuals who place hate, fear and bigotry ahead of the Gospel message they only pretend to believe in.