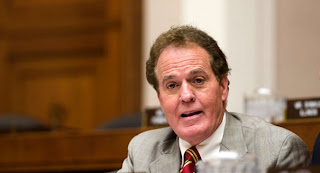 Some in the GOP - i.e., the non-Christofascists - are livid that another Republican member of Congress (pictured above) has reignited controversy by saying that Todd Akin "was partially right" in his remarks about rape and abortion that likely guaranteed Akin's defeat on November 2012 in the Senatorial contest in Missouri.    Indeed, the increasingly rare sane members of the GOP are desperately looking for ways to stop the insane rape comments.  The problem the face is that their political party has been taken over by the knuckle dragging, Bible toting Christofascists who just cannot comprehend that a majority of Americans find their beliefs and statements reprehensible.  Politico looks at this latest firestorm over Christianist batshitery.  Here are excerpts:

Rep. Phil Gingrey’s attempts to explain Todd Akin’s rape remarks are leaving many Republicans beyond frustrated that a few in their party can’t help but insert rape into the already contentious abortion debate.

“This is actually pretty simple. If you’re about to talk about rape as anything other than a brutal and horrible crime, stop,” said Republican strategist Kevin Madden, who was a senior adviser in Mitt Romney’s campaign.

On Thursday, the Georgia Republican didn’t heed that advice, telling a local Chamber of Commerce breakfast that Akin was “partially right” when he said last year that a woman can stop herself from getting pregnant.

“We tell infertile couples all the time that are having trouble conceiving because of the woman not ovulating, ‘Just relax. Drink a glass of wine. And don’t be so tense and uptight because all that adrenaline can cause you not to ovulate,’” Gingrey said.

He also said that Akin’s definition of a “non-legitimate rape” could be “a scared-to-death 15-year-old that becomes impregnated by her boyfriend and then has to tell her parents.”

But Gingrey’s lengthy explanation of what Akin meant was quickly circulated by Democrats, repudiated by medical groups, and had some Republicans smacking their heads in frustration.

And it may have added new urgency to a training program that’s already being launched by an anti-abortion group — the Susan B. Anthony list — to keep candidates and lawmakers from continually making the same kinds of comments that may have helped ruin Republicans’ chances of winning the Senate.

Former Rep. Mary Bono Mack (R-Calif.) questioned why Gingrey was talking about the months-old comment in the first place.  “There’s no way to defend what Todd Akin said,” Bono Mack said. “You just can’t do it and you shouldn’t try to put it into a scientific context. It was a bad statement. And to try to defend it or explain someone else’s poor choice of words, it would be a fool’s errand.”

Training is not the solution to the GOP's problem.  The only real solution is to expel the religious extremists from the party and to cease pandering to them in any way.  Will the GOP do this?  I doubt it.