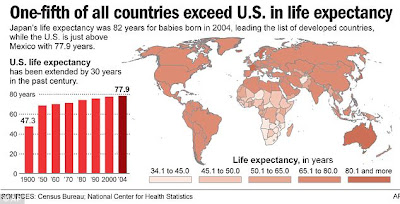 A new report by two of the nation's leading health research institutions not surprising has found that life expectancy for Americans lags that of other economically advanced nations.  Why is the finding no surprise?  Simply put, because(i)  the U.S. has off the charts gun violence and deaths compared to other advanced nations, and (2) no other advanced nation treats so many of its citizens as disposable garbage when it comes to access to health care, especially preventive care.  For once America is exceptional, but in a very negative and unseemly way.  And of course those most responsible for both causes are precisely those who hold themselves out as "godly Christians" and conservatives.  A piece in the Virginian Pilot looks at the report findings.  Here are highlights:

The United States suffers far more violent deaths than any other wealthy nation, due in part to the widespread possession of firearms and the practice of storing them at home in a place that is often unlocked, according to a report released Wednesday by two of the nation's leading health research institutions.

For many years, Americans have been dying at younger ages that people in almost all other wealthy countries. In addition to the impact of gun violence, Americans consume the most calories among peer countries and get involved in more accidents that involve alcohol. The U.S. also suffers higher rates of drug-related deaths, infant mortality and AIDS.

The report found that U.S. health disadvantages aren't limited to the poor and uninsured. Even white, college-educated, and wealthier Americans tend to be in worse health than their peers in other developed countries.

The nation's health disadvantages have economic consequences. They lead to higher costs for consumers and taxpayers as well as a workforce that remains less healthy than that of other high-income countries.

Researchers noted that the U.S. has a large uninsured population compared to other countries with comparable economies, and more limited access to primary care. And although the income of Americans is higher on average than that of other wealthy countries, the United States also has a higher level of poverty, especially among children.

The National Rifle Association did not immediately return calls seeking comment about the report, but in the past gun-rights advocates have fought any suggestion that firearms ownership has public health implications, and they have won cuts in the government's budget for such research.

They estimated that homicide and suicide together account for about a quarter of the years of life lost for U.S. men compared to those in those peer countries. Homicide, they noted, is the second leading cause of death among adolescents and young adults aged 15-24. The large majority of those homicides involve firearms. The researchers said there is little evidence that violent acts occur more frequently in the United States than elsewhere. It's the lethality of those attacks that stands out.

"The size of the health disadvantage was pretty stunning. The fact that our risk of death from homicide is seven times higher and from shootings 20 times higher is pretty dramatic, but I would add that was probably just as important to us was the extent of the health disadvantage in young Americans that had nothing to do with violent injuries."  Woolf cited the statistics regarding premature babies and the high prevalence of illness among teenagers as equally disturbing as the statistics on guns and violence.

These sad figures highlight the toxicity of the fruits of conservative and Christianist policies promoted by today's Republican Party.  It is a shameful disgrace.
Posted by Michael-in-Norfolk at Thursday, January 10, 2013