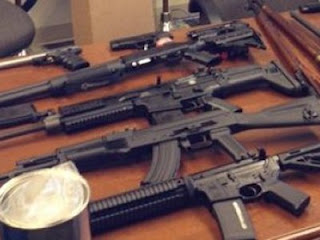 Conservative columnist Kathleen Parker is apparently back on the wagon and not drinking the GOP Kool-Aid - at least that's what her new Washington Post column on gun control suggests.  We can readily expect Parker to be slammed and decried by the Christofascist/Tea Party/NRA base of the GOP as a traitor and effete liberal.   In the column Parker looks at the history of gun control and reminds us that once militant black activists supported a no limits approach to gun control - something that would horrify the angry white males who comprise the loudest opponents of rational gun control laws.  As is usually the case, objective facts and an understanding of history cut the far right's arguments off at the knee caps.  Here are highlights from Parker's column:

Unlike many who recently have joined the debate about gun rights, I have a long history with guns, which I proffer only in the interest of preempting the “elitist, liberal, swine, prostitute, blahblahblah” charge.

By today’s standards my father would be considered a gun nut, but his sentiments were understandable in the context of his time. Like others of his generation, he had witnessed Germany’s disarming of its citizenry and the consequences thereafter. Thus, the slippery slope of which gun-rights advocates speak is not without precedent or reason.

But the history of gun-control laws is not without contradictions and ironies that belie the current insistence that guns-without-controls is the ipso facto of originalist America. In fact, the federal government of our Founders made gun ownership mandatory for white males, while denying others — slaves and later freedmen — the privilege.

Today, the most vociferous defenders of gun rights tend to be white, rural males who oppose any regulation. But theirs was once the ardently held position of radical African Americans. Notably, in the 1960s, Black Panthers Bobby Seale and Huey Newton toted guns wherever they went to make a point: Blacks needed guns to protect themselves in a country that wasn’t quite ready to enforce civil rights.

In one remarkable incident in May 1967, as recounted in The Atlantic by UCLA law professor Adam Winkler, 24 men and six women, all armed, ascended the California capitol steps, read a proclamation about gun rights and proceeded inside — with their guns, which was legal at the time.  Needless to say, conservatives, including then-Gov. Ronald Reagan, were suddenly very, very interested in gun control. That afternoon, Reagan told reporters there was “no reason why on the street today a citizen should be carrying loaded weapons.”


The degree of one’s allegiance to principle apparently depends mainly on who is holding the gun.

[T]he call meanwhile to ban assault weapons or limit magazines in the wake of the horrific mass murder of children and others at Sandy Hook Elementary in Connecticut is hardly draconian. It won’t solve the problem of mentally disturbed people exacting weird justice from innocents, but it might limit the toll.


One also imagines that the old Reagan would say there’s no reason a citizen needs an assault weapon or a magazine that can destroy dozens of people in minutes. He would certainly be correct and, in a sane world, possibly even electable.

The bottom line is that we need reasonable gun control laws and automatic weapons and large ammunition clips need to be banned now.  And that's only the beginning of what needs to be done.