Thanks to Failed GOP Policies, American Middle Class No Longer Richest in the World 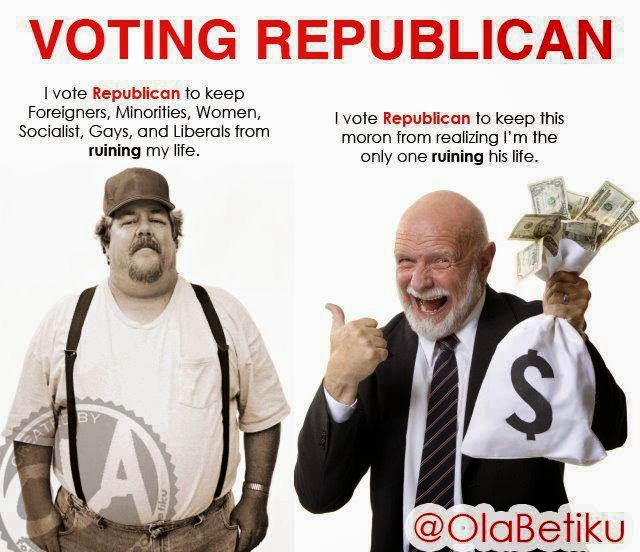 In its quest to destroy Barack Obama by tanking the U.S. economy and obstructing levels of stimulus spending high enough to actually turn the economy around Congressional Republicans and, to a lesser extent, their state level counterparts, have claimed an additional victim: the American middle class, once the most prosperous in the world.  Now, the middle class in Canada - which has a national health care system and much more restrictive regulations on big banks - claim the title of the most prosperous in the world.  Moreover, America's poor are now poorer than the poor in a number of other countries. Yet despite this shocking data, cretins in the Tea Party continue to support the party that is working against their best economic interests.  The New York Times looks at the sad situation.  Here are highlights:

The American middle class, long the most affluent in the world, has lost that distinction.

While the wealthiest Americans are outpacing many of their global peers, a New York Times analysis shows that across the lower- and middle-income tiers, citizens of other advanced countries have received considerably larger raises over the last three decades.

After-tax middle-class incomes in Canada — substantially behind in 2000 — now appear to be higher than in the United States. The poor in much of Europe earn more than poor Americans.

The numbers, based on surveys conducted over the past 35 years, offer some of the most detailed publicly available comparisons for different income groups in different countries over time. They suggest that most American families are paying a steep price for high and rising income inequality.

Median income in Canada pulled into a tie with median United States income in 2010 and has most likely surpassed it since then. Median incomes in Western European countries still trail those in the United States, but the gap in several — including Britain, the Netherlands and Sweden — is much smaller than it was a decade ago.

The struggles of the poor in the United States are even starker than those of the middle class. A family at the 20th percentile of the income distribution in this country makes significantly less money than a similar family in Canada, Sweden, Norway, Finland or the Netherlands. Thirty-five years ago, the reverse was true.

With a big share of recent income gains in this country flowing to a relatively small slice of high-earning households, most Americans are not keeping pace with their counterparts around the world.

“The idea that the median American has so much more income than the middle class in all other parts of the world is not true these days,” said Lawrence Katz, a Harvard economist who is not associated with LIS. “In 1960, we were massively richer than anyone else. In 1980, we were richer. In the 1990s, we were still richer.”  That is no longer the case, Professor Katz added.

Three broad factors appear to be driving much of the weak income performance in the United States. First, educational attainment in the United States has risen far more slowly than in much of the industrialized world over the last three decades, making it harder for the American economy to maintain its share of highly skilled, well-paying jobs.

A second factor is that companies in the United States economy distribute a smaller share of their bounty to the middle class and poor than similar companies elsewhere. Top executives make substantially more money in the United States than in other wealthy countries. The minimum wage is lower. Labor unions are weaker.


[T]he stagnation of income has left many Americans dissatisfied with the state of the country. Only about 30 percent of people believe the country is headed in the right direction, polls show.

Even with a large welfare state in Sweden, per capita G.D.P. there has grown more quickly than in the United States over almost any extended recent period — a decade, 20 years, 30 years. Sharp increases in the number of college graduates in Sweden, allowing for the growth of high-skill jobs, has played an important role.

Even in Germany, though, the poor have fared better than in the United States, where per capita income has declined between 2000 and 2010 at the 40th percentile, as well as at the 30th, 20th, 10th and 5th.

The task for Democrats is to take the message to voters that the policies of the GOP andGOP  preferences for the wealthy and contempt for the middle and lower classes are fueling the data set out above.    GOP ploys to religious belief and feign patriotism are used as smoke screens to blind the ignorant to the fact that the GOP is rapidly becoming their worst enemies.