What Can Happen When Your Boss is Anti-Gay 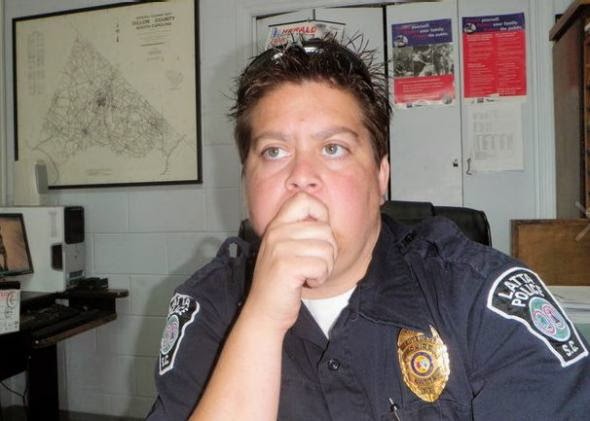 Sadly, in 29 states whether or not one is competent at their job and popular with customers and/or the citizenry still doesn't matter.  All it takes is a new homophobic boss (usually coupled with spineless co-workers) and before you realize what is happening you are unemployed.  What happened to police chief Crystal Moore in Latta, South Carolina is a case in point. Two decades of commendatory service went out the window.  I know how she must feel - the same thing happened to me.  Meanwhile, the GOP controlled House of Representatives continues to block the passage of the Employment Non-Discrimination Act and Barack Obama sits with his thumb up his ass and refuses to sign an ENDA executive order.  Slate looks at the fate that fell Crystal Moore all because her new boss is a raging homophobe.  Here are highlights:

The tiny town of Latta, S.C., found itself embroiled in scandal last week after Mayor Earl Bullard fired police chief Crystal Moore. Moore alleges that her firing was nothing more than a vindictive display of homophobia by Bullard, who became mayor in December 2013. After loyally serving Latta for more than two decades without incident, the openly gay employee suddenly found herself at odds with a new boss who opposes gay rights. Seven reprimands later—the only reprimands she had received during her time on the force, all issued on the same day—Moore was out of a job. This is what can happen when your new boss is anti-gay.

During a secretly recorded phone call, Bullard said that he would rather have a drunkard look after his children than an openly gay individual. (If you’re concerned with Bullard’s privacy, he claimed he would say this to anyone directly.) In perhaps the most damning part of the call, Bullard states, “I'm not going to let two women stand up there and hold hands and let my child be aware of it.” Other councilmembers have alleged that Bullard’s intention to fire Moore was formed even before he took office.

I hope those who view former Mozilla CEO Brendan Eich as the victim of a vengeful mob are paying attention. In South Carolina, we have a police chief who was allegedly terminated for her sexual orientation. Where is the outrage over Moore’s firing?

Latta residents continue to express their support for the now-deposed police chief, but the loss of a dedicated and respected public servant should come as no surprise: South Carolina offers absolutely no employment protections for LGBTQ employees. Last year, South Carolina’s Republican senators, Tim Scott and Lindsey Graham, both voted against the federal Employment Non Discrimination Act, known as ENDA. House Speaker John Boehner claimed that “people are already protected in the workplace,” suggesting that ENDA would lead to frivolous lawsuits. Since then, Boehner has been instrumental in blocking a simple up-or-down vote on the legislation.

While some seem to think that the gay rights movement is mounting witch hunts against those it brands homophobic bigots, cases like Crystal Moore’s remind us that for most the battle remains one for simple equality.

Hopefully, Moore will file a federal lawsuit against Bullard and the town.