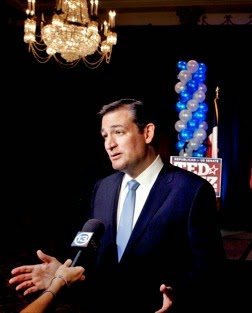 I view Texas Senator Ted Cruz as at best a demagogue on the style of the late Joseph McCarty - he even bears a resemblance to McCarthy.  Like most of the modern day Pharisees, Cruz talks up religion while backing GOP programs that are the antithesis of the Gospel message.  Now, with Obamacare enrollments above projections, Cruz's nightmare of success of Obamacare may be coming true.  The more Americans that enroll under the Affordable Health Care Act, the more impossible it will be for the GOP to dismantle the program - especially since their only replacement would be a return to the broken system that existed previously.  A piece in Politico looks at what is happening.  Here are excerpts:

Last August, as conservatives barnstormed the country seeking to build support for a cockamamie plan to shut down the U.S. federal government unless Congress voted to repeal the Affordable Care Act, Ted Cruz, the Texas Republican senator, said something surprisingly prescient about the president’s signature health-care law.

“President Obama wants to get as many Americans addicted to the subsidies because he knows that in modern times, no major entitlement has ever been implemented and then unwound,” he said. The worry, according to Cruz, was that once the ACA went into effect, we’d all be “addicted to the sugar.” Then, it would be too late to roll it back.

Cruz’s nightmare, and the left’s long-held dream, has come true. Finally, after years of failed reform efforts, the U.S. government is actually trying to provide affordable health coverage for all. And it’s working, despite Republicans’ relentless attempts to deep-six the law. As a result, the politics of Obamacare will never be the same.

The right’s biggest fear was never really, as Cruz’s comments revealed, that Obamacare wouldn’t succeed. It was that it would.

Americans, it turns out, have a compelling desire for a basic necessity of life: affordable health coverage. That’s why, despite the HealthCare.gov debacle, and campaigns in red states to discourage enrollment and defund outreach efforts, eight million Americans signed up. Young people ignored tasteless ads and anti-Obamacare campus beer parties, funded by the Koch brothers, to enroll at strong enough rates. Millions more enrolled in Medicaid, even in states that did not expand the program, as awareness of coverage options increased. There is even a big upswing in take-up of employer coverage, despite GOP claims that Obamacare would destroy the employer-based system. The Congressional Budget Office just lowered its estimate of the law’s costs, and overall health-care inflation is at historic lows. It’s been a tough few weeks for the Obamacare-bashers.

In fact, the law’s success reverses the political calculus: Those who advocate repeal can be rightly accused of taking away health coverage from some 15 million Americans. Although some of these are low-income people, less likely to vote, many others are middle-income people who are surprised and relieved at having access to good, affordable health coverage – including, by the way, a lot of Republicans.

Recent polling shows that support for repeal is shrinking to the most conservative voters, key to Republican primaries but not enough to win most statewide general elections. When given a choice of whether to repeal the ACA or keep it intact or with small modifications, a recent Bloomberg poll found, only a third of Americans (34 percent) chose repeal. That’s about the same proportion who have favorable views of the Tea Party.

Which may be why the new anti-ACA ads being run by a Koch brothers-funded group against Democratic Senate candidates in several states do not call for repeal.

For Democrats to take advantage of the ACA’s success on the ground, they must both make it a motivating issue for their base and reach out to independents, who remain skeptical about the law.

In 2010, Democrats made the unforgivable mistake of not answering GOP attacks on Obamacare, mostly aimed at seniors . . . . This year, most Democrats understand that they cannot ignore the issue. We can see a new political strategy emerging in a campaign ad that targets the most important group of voters for Democrats to turn out: women.

Another Democratic pollster, Celinda Lake, recommends that candidates make the failure of some Republican governors and state legislatures to expand Medicaid a central issue. Lake told me that Medicaid is popular with two out of three voters, who are sympathetic to a state-run program and angry that, for partisan reasons, Republicans are allowing their tax dollars go to other states.

There's more in the article.  One can only hope that Democrats will play their cards properly and use Obamacare as a sword against Republicans who are conducting a war on the poor and average Americans.
Posted by Michael-in-Norfolk at Wednesday, April 23, 2014