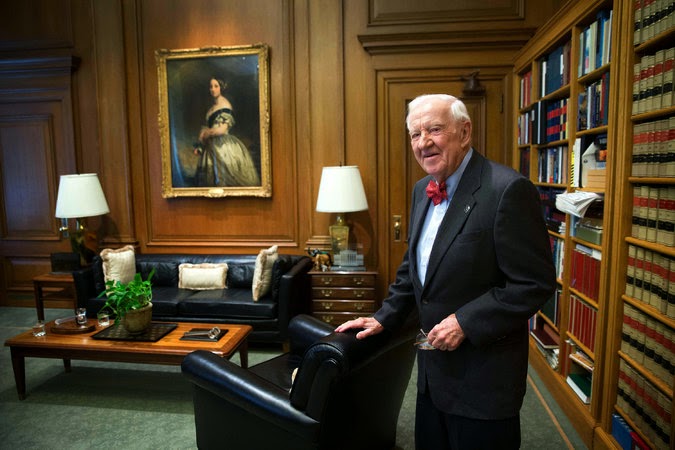 With the sometimes exception of Justice Anthony Kennedy (particularly in the area of gay rights), the conservative majority on the U.S. Supreme Court hold most average Americans in open contempt and have sided with the wealthy, huge corporations and GOP racists.  With its ruling in McCutcheon v. Federal Election Commission, this majority more or less put the government up for sale to big money interests and amazingly found that huge campaign bribes contributions while one is a candidate is miraculously different than a huge bribe while in office.  The distinction, of course defies belief and common sense.  Former Justice John Paul Stevens has condemned the ruling and has suggested a constitutional amendment to protect America's democracy.  A piece in the New York Times looks at Justice Stevens' views.  Here are excerpts:

Justice John Paul Stevens, who turned 94 on Sunday, is a mild man with an even temperament. He has a reverence for the Supreme Court, on which he served for almost 35 years until his retirement in 2010, and he is fond of his former colleagues.

But there was a hint of anger in some of his remarks when I went to see him last week in his Supreme Court chambers. He said the court had made a disastrous wrong turn in its recent string of campaign finance rulings.

“The voter is less important than the man who provides money to the candidate,” he said. “It’s really wrong.”

He talked about what he called a telling flaw in the opening sentence of last month’s big campaign finance ruling. He filled in some new details about the behind-the-scenes maneuvering that led to the Citizens United decision. And he called for a constitutional amendment to address what he said was the grave threat to American democracy caused by the torrent of money in politics.

Chief Justice John G. Roberts Jr. started his controlling opinion with a characteristically crisp and stirring opening sentence: “There is no right more basic in our democracy than the right to participate in electing our political leaders.”

But that was misleading, Justice Stevens said. “The first sentence here,” he said, “is not really about what the case is about.”

The plaintiff, Shaun McCutcheon, an Alabama businessman, had made contributions to 15 candidates in the 2012 election. He sued so he could give money to 12 more. None of the candidates in the second group was running in Alabama.

Mr. McCutcheon was not trying to participate in electing his own leaders, Justice Stevens said. “The opinion is all about a case where the issue was electing somebody else’s representatives,” he said.

The occasion for our talk was Justice Stevens’s new book, “Six Amendments: How and Why We Should Change the Constitution.” One of those amendments would address Citizens United, which he wrote was “a giant step in the wrong direction.”

The new amendment would override the First Amendment and allow Congress and the states to impose “reasonable limits on the amount of money that candidates for public office, or their supporters, may spend in election campaigns.”

His own book has, in addition to the chapter on campaign finance, chapters on gun control, the death penalty, gerrymandering and aspects of state sovereignty. Each concludes with a proposed amendment.