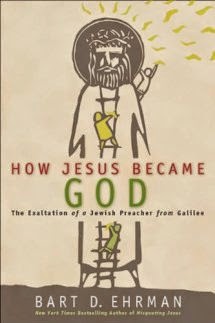 As I have argued before, science, modern knowledge and even new archaeological discoveries - indeed, modernity in general - are the true enemies of Christianity, or at least the forms of Christianity which depend on an inerrant interpretation of the Bible and which cannot tolerate anything that deviates from a literal - albeit, often very selective - reading of the Bible.  Hence, the conniption fits by folks like Albert Mohler of the Southern Baptist Convention over the findings of the human genome project which demonstrate that Adam and Eve as portrayed in Genesis simply never existed.   And hence, in my view at least, the extreme hostility on the part of far right Christians towards LGBT individuals.  If society comes to see us as normal and with equal rights the development flies directly against the cherry picked passages of the Bible used to condemn us.  Bart Ehrman’s new book,  How Jesus Became God: The Exaltation of A Jewish Preacher From Galilee looks at some of the biblical scholarship that threatens the simplistic, anti-knowledge and anti-modernity mind set of the Christofascists.  Andrew Sullivan summarizes some of it:

What Ehrman does in this book – as he did most memorably in Misquoting Jesus – is explain how the texts that we have about the life, death and resurrection of Jesus came to be written. I am not qualified to judge the details of the scholarship – my knowledge of such matters is a tiny fraction of Ehrman’s. I know no Aramaic or Hebrew and very little Ancient Greek. Readers with more expertise may well, with any luck, deal with some of the specific controversies – such as the notion that Jesus probably wasn’t buried at all – as we go along.

But the book’s main claims about the origins and nature of the texts are not in any scholarly doubt. And they challenge the traditional and reflexive mental universe that most Christians, and all fundamentalists, share. For many Christians in the modern world, there is an unchallenged notion of an inerrant text that contains what we have even come to call the “gospel truth.” It is entirely inspired by God. It has complete authority in Protestant circles and shared authority in Catholicism (along with church teaching and the sensus fidelium). It is the sole authorized account of the extraordinary story that changed the world.

And yet it isn’t the only account – we have many other extant Gospels that never made the cut. Those Gospels are not as compelling or as coherent or as influential – but they sure do exist. That very fact – established in the 20th Century – explodes any idea of “orthodoxy” among the first Christians.

Does this rebut Christianity in a decisive way? For many orthodox Christians, wedded to the notion of a single, coherent and inerrant text, it must. But since the scholarship is pretty much indisputable, it seems to me that it is not Christianity that should be abandoned in the wake of these historical revelations, but a false understanding of what the Gospels and Letters actually are. In the end, the sole criterion of a religion is whether it is true. And if you’re misreading its core texts and failing to understand their origins and nuances, you’re not committed to the truth. You’re committed to a theology that has become more important than the truth.

I think that it is pretty clear to anyone honest that today's Christofascists and their political whores in the GOP care nothing whatsoever about the truth.  Rather, all that matters is upholding the alternative universe that they increasingly live in as science, knowledge and the real truth threaten their house of cards religious belief system.  This absolutely terrifies them and is more than their sick psyches can deal with. Hence the way they lash out a gays, modern science and anything else that would force someone rational to question their beliefs.