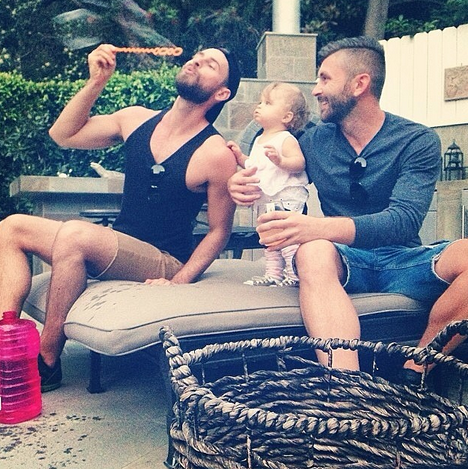 The Christofascists and their simpering political whores in the Republican Party who oppose same sex marriage always claim to be "concerned about the children" - even as they are only too willing to throw the children of same sex couples onto the trash heap along with their gay or lesbian parents.  Actions speak louder than words and by their opposition to marriage equality these individuals and "family values" organizations demonstrate that they truly do not give a damn about the children of same sex couples.  Now, a new study published in The New England Journal of Medicine finds that marriage equality has positive effects on public health by improving access to healthcare for same-sex couples and their children and reducing stresses.  Thus, in reality, the Christofascists are harming the children.  Deliberately harming them.  Here are highlights on the study via GayRVA:

[M]arriage equality has positive effects on public health by improving access to healthcare for same-sex couples and their children, and reducing the risks of anxiety, depression and other mental health problems when a couple’s relationship is not legally recognized.

According to the report, public health research has suggested not only that discriminatory environments and bans on same-sex marriage are detrimental to health but also that legalizing same-sex marriage (among other policies expanding protections) contributes to better health for LGBT people.


About 55% of Americans are covered through their own or a family member’s employer-sponsored health insurance plan, but many employers do not extend coverage to same-sex partners or children of same-sex partners. Even among companies with more than 200 employees, only 42% offer health benefits to same-sex partners, according to the 2012 Employer Health Benefits Survey conducted by the Kaiser Family Foundation and Health Research and Educational Trust.

Thus, adults in same-sex relationships are less likely than their heterosexual counterparts to have health insurance and may therefore delay or forgo necessary medical care. When states legalize same-sex marriage, some workplaces that offer employer-sponsored insurance are required to treat married same-sex couples just as they treat married opposite-sex couples.

Same-sex marriage also strengthens access to health insurance for the 220,000 children who are being raised by same-sex parents in the United States.

The take away?  When Victoria Cobb, Tony Perkins and Maggie Gallagher bloviate about caring about "the children" know that they are lying.
Posted by Michael-in-Norfolk at Tuesday, April 22, 2014