How to Make GOP Pay for its Medicaid Expansion Opposition 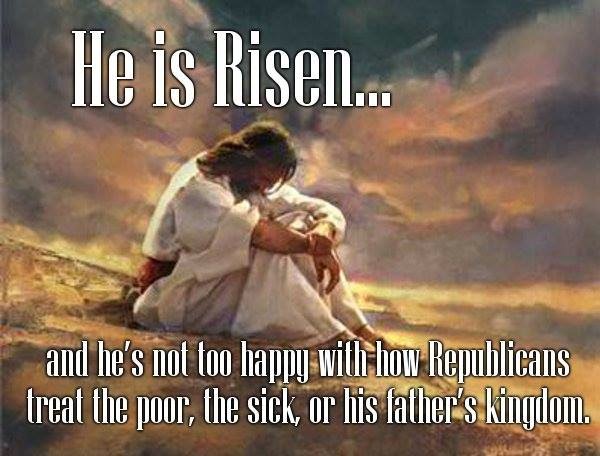 Today is Easter Sunday and the "godly folk" are out in force going to church and in many cases feigning loyalty to the Gospel message even as far too many of them are supporting the GOP and its policies that are the antithesis of Christ's message of love and compassion for others, especially the poor, the sick and the less fortunate.  Indeed, at times I think the dictionary needs to have a photo of the GOP logo and a photo of far right Christians next to the words "Hypocrite" and "Hypocrisy."  These people simply are not nice or decent people.  Their sole focus is on greed, hate and mistreatment of others.  A piece in Salon looks at the evilness of the GOP's blocking of Medicaid expansion and the otherwise preventable deaths that will result.  Here are some highlights:

Liberal backers of Obamacare have increased their fury in recent weeks over how 24 states, controlled in part or in whole by Republicans, have rejected the law’s Medicaid expansion, which the Supreme Court ruled they could do without consequences back in 2012. This has denied 5 million Americans health insurance coverage. “It really is just almost awesome in its evilness,” said Jonathan Gruber, one of the architects of healthcare reform. “It appears to be motivated by pure spite,” added Paul Krugman. “I am burying my best friend because of the policies of the Republican Party,” remarked one anguished woman in a viral story about Charlene Dill, a 32-year-old from Florida who would have been covered by Medicaid under the expansion, but instead went without the care she needed, and collapsed while working.

People are right to be outraged. These states are turning down full funding for the expansion for three years, and 90 percent thereafter, declining the economic stimulus from the flow of that Medicaid money. And this will lead to somewhere between 7,000 and 17,000 preventable deaths due to a lack of coverage, according to public health researchers.
The fact that these red states sued to overturn all of Obamacare should have been a tipoff that they wouldn’t exactly jump at the chance to expand coverage under the law, if they could opt out instead. Liberals mistakenly performed a cost-benefit analysis, thinking rationally, what state would turn down free money from the federal government to cover their poorest citizens? (In fact, that’s exactly what Jon Gruber admitted he thought initially.) But there’s nothing logical about knee-jerk opposition to anything proposed by the president, which has been the status quo in the Republican Party since Inauguration Day 2009.

I can only think of one political campaign where the Medicaid expansion actually rose to the surface as an issue: last year’s governor’s race in Virginia. And Terry McAuliffe, running on a platform of expanding Medicaid, won (because the Legislature remained in Republican hands, that expansion has not yet gone through). The issue has real potential for Obamacare backers: New polling shows that even Republican voters support expanding Medicaid for their states.

Some progressive candidates do want to finally pull this out as a hammer for the fall campaign.  . . . .  There must be consequences for this practice of cruelly leaving poor Americans without health coverage in a proxy fight against Obamacare. Democrats cannot will Medicaid expansion into existence in red states by sitting on the sidelines, tut-tutting that Republicans “would be crazy not to take such a good deal,” or hoping that things will simply work out. They have to actually fight. The delay in coming around to this reality was inexcusable; now there’s at least a chance to build the movement necessary to accomplish this.

Personally, I want to see Republicans attacked for their policies that will lead to otherwise avoidable deaths.   And the warfare needs to extend beyond the GOP itself to members of the GOP base, especially the Christofascists.  They need to be made to be synonymous with hypocrisy, greed and general nastiness.  They need to become shunned in decent society and treated as the monsters that they are rapidly becoming.   Being a GOP supporting conservative Christian needs to make one a social pariah.  Is this harsh?  Yes, it is.  But for too long these people have been given undeserved deference and respect.