The Future of the GOP: Plutocrats vs. Christofascists/Tea Party 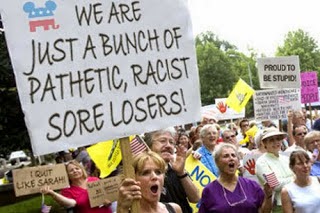 Republicans can spin stories about party unity, but the reality is that a civil war IS being waged in the GOP and it pits the wealthy plutocrats who want a new Gilded Age oligarchy against the knuckle dragging, spittle flecked lunatics of the Christofacists/Tea Party.  Regardless of which group wins the civil war, average sane Americans will be the losers.  And if the Christofascists/Tea Party prevails, this will be especially so for those who are non-white, non-Christian and not heterosexual.  For years I have said that the GOP establishment created a Frankenstein monster when it embraced the Christofascists and their stealth theocrats who wear the Tea Party moniker.  Across the country, Republicans voted these lunatics and extremist onto city and county committees.  This monster was created and did not arise from out of nowhere.  Now the plutocrats are stuck seeking a way to kill the monster they helped create. A piece in Salon looks at the battle for the soul of the GOP.  Here are some excerpts:

The Republican Party is no longer the party of Nelson Rockefeller. This is a shocker, I know —  if you’ve been asleep for the past 25 or 30 years. But according to the National Journal this comes as a surprise to many of the rich Republicans who are entering the electoral fray.

It took David Perdue about 20 seconds of speechifying to expose a tension roiling the Republican Party. Speaking in January, the former business executive turned Georgia candidate for U.S. Senate asked a group of local Republicans to parse the resumes of his primary foes.


“There’s a high school graduate in this race, OK?” said Perdue, referring to his opponent, former Georgia Secretary of State Karen Handel. “I’m sorry, these issues are so much broader, so complex. There’s only one candidate in this race who’s ever lived outside the United States. How can you bring value to a debate about the economy unless you have any understanding about the free-enterprise system and what it takes to compete in the global economy?”

The two-pronged swipe elicited cries of condescension and elitism that eventually forced Perdue to apologize. And it revealed a vital reality about the state of the Republican Party as its members prepare to select a standard-bearer for the 2016 presidential primary: The GOP has long ago shed its stereotype of being the party catering to the wealthy.

[T]he party of the suburbs has morphed into the party of the exurbs. But the fact is that the Republicans have been massaging this white, working-class, rural and exurb voting bloc for decades. In fact, it used to have a specific name: Reagan Democrats. They were described that way by Stanley Greenberg, the pollster who coined the name for working-class whites who came to see the Democrats as being obsessed with the poor, the unemployed, feminists and people of color at their expense.

Those who financed the conservative movement very carefully nurtured the so-called Silent Majority of white people who didn’t hold with all that pointy-headed multiculturalism or welfare queens and feminazis — the hardscrabble Real Americans of the heartland who loved flag and country. If the big GOP donors have been watching “Mad Men” reruns and think they’re financing a movement of Wall Street traders and Junior League housewives, they’re on the wrong channel. They need to turn on “Duck Dynasty” and get themselves some guns.

For the past couple of years there has been much rending of garments in the Republican political establishment over the Tea Party dominating the GOP and running it into the ground. But they created the Tea Party out of that original white, working-class bloc by feeding their prejudices and stoking their insecurities.

Now their monster is out of control and they don’t know how to lure it back into its cage. But the Tea Party isn’t their only fantasy creature. Perhaps their greatest achievement is the mythic Genius Plutocrat, the Ayn Rand Galtian hero whose courage, intellect and overall superiority in all ways is demonstrated by the singular fact that he has so much money. It looks like that beast has escaped his leash as well and the two grotesque phantasms are destined for a political cage match of epic proportions in 2016.

Christofascists will not back down. With their Bibles, guns, flags and abject hate, they will change America by stelthful legislstion or violnce. Lest we sane folks forget, they're fascists...plain and simple.