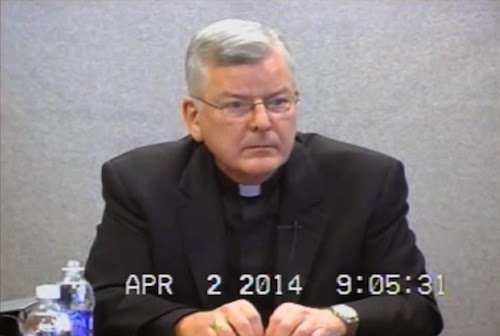 Among the members of the Roman Catholic hierarchy in America there are few high clerics than bear more open hate and animus towards gays than Archbishop John Nienstedt (pictured above) of the archdiocese of  Minneapolis and St. Paul.  Nienstedt has disseminated foul anti-gay lies and gone above and beyond in his efforts to block marriage equality in Minnesota.  He even went so far as to claim that Satan is the source of same sex marriage.  Thankfully, his efforts failed and now, Nienstedt finds himself exposed as a liar and major player in obstruction of justice in the context of sexual abuse of children and youths by Catholic clergy.  Based on Nienstedt's own testimony, Pope Francis ought to strip Nienstedt of his title and cast him out into the streets.  The New Civil Rights Movement looks at Nienstedt's own damning testimony:

After much stonewalling, the archbishop of Minneapolis and St. Paul finally testified in a four-hour court deposition on April 2 about his role in managing child sex abuse cases, and his comments can only be described as damning.

Archbishop John Nienstedt claimed to have no knowledge that known child sexual abusers were working under his nose during his current six-year tenure, claimed to have delegated all duties surrounding allegations and follow-up of child sex abuse cases, admitted to actively hiding information of priests suspected of child abuse, and even admitted that his diocese had never handed over to law enforcement authorities a single complete case file.

One of the plaintiffs’ attorneys is accusing Nienstedt of lying under oath. “We have a serious pattern of deceit and deception by this archbishop and his predecessors,” Jeff Anderson says, according to Minnesota Public Radio.

Throughout the contentious questioning, Nienstedt portrayed himself as a leader who relied on others to handle the clergy sexual abuse crisis. He professed little knowledge of the scandal within his archdiocese and said he assumed it was safe for children. Nienstedt said it “didn’t occur” to him to ask for a list of abusive priests when he arrived in 2007 and that he didn’t review any clergy files.

Archbishop Nienstedt has been one of the loudest anti-gay voices in the Catholic Church in America. He has claimed “Satan” is the source of same-sex marriage, he spammed hundreds of thousands of Minnesota residents with an anti-gay marriage DVD sent through the U.S. mail, and yet had the audacity to claim his attempts to ban same-sex marriage were “not intended to be hurtful.”

Make no mistake.  If Pope Francis fails to take action against Nienstedt it will speak volumes about the falsity of his claims to wanting to end the sex abuse scandal and hold high clerics responsible.
Posted by Michael-in-Norfolk at Tuesday, April 22, 2014