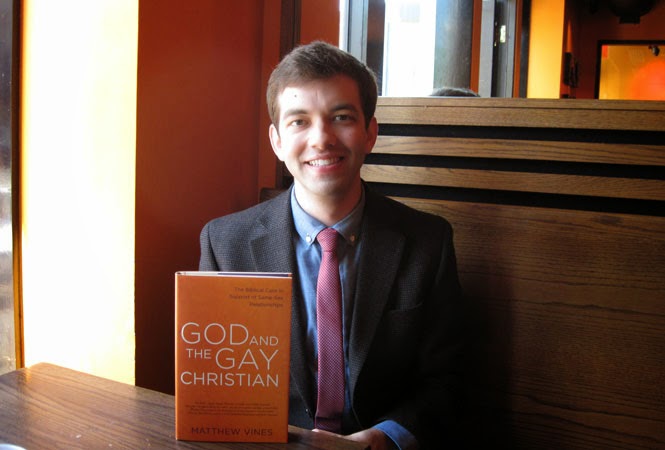 At times I ponder how one can become so fearful of uncertainty and anything that challenges a simple-minded (actually, an ignorance embracing), house of cards faith construct that one attacks anything and anyone that threatens their imaginary fantasy world.  Is it a form of mental illness that fuels such conduct?  It surely is not the behavior of normal, well adjusted people.  Yet this fear and reaction against thinking are the norms of today's Christofascists.  Anything and anyone who challenges their world view must be destroyed.  Hence their animus towards gays.  Hence their animus towards the theory of evolution, etc.  A new book on gay Christians has some of the "godly folk" in full spittle flecked conniption fits.  LGBTQ Nation looks at the reaction to “God and the Gay Christian,” by Matthew Vines (pictured above).  Here are some highlights:

A new book that debuts in print this week is already causing outrage and discordant reactions from right-wing American Christian conservatives, who have labeled the book a sham, shameful, inaccurate, and a misinterpretation of the basic tenets of the Christian faith.

The author, Matthew Vines, is a quiet and unassuming 24-year-old former Harvard university student from Wichita, Kan. His book, “God and the Gay Christian,” reexamines what the Christian bible actually says about same-sex relationships, and explores the biblical context and historical background regarding sexual orientation and gender identity.

Yet, judging from the outraged reactions to his new book by right-wing luminaries, one would think that Satan himself co-authored Vines’ latest project.

Vines’ new book is a straight-forward structured analysis, coupled with a well researched case, that refutes some common misconceptions of the biblical intent and instead argues for a biblical support of same-sex relationships. The book is 180 pages, followed by another 20 pages of footnotes, citations, and other documentation to make the author’s case.

But critics are quick to dismiss Vines research, and instead opt to reassert their own brand of anti-gay rhetoric, cultivated over years of their own biblical interpretations.

“Most non-affirming evangelicals aren’t prepared to have this conversation about Scripture yet, so I think a fair amount of bluster will precede actual, widespread engagement with the arguments I’m putting forward,” he says.

“But at some point, the bluster will clearly fail, and even the most determined opponents will have to engage with these arguments,” adds Vines.   “God and the Gay Christian” by Matthew Vines is due to be released April 22, 2014.

Science, knowledge and archeology discoveries are all enemies to the Christofascists flimsy faith construct.  As time goes by only the most ignorant and mentally unhinged will remain clinging to the Christofascists' belief that the Bible is inerrant.  As it is, the human genome project has revealed that Adam and Eve never existed and, therefore, the whole Christian myth of "The Fall" crumbles into dust and Christ's mission of redemption becomes unnecessary.