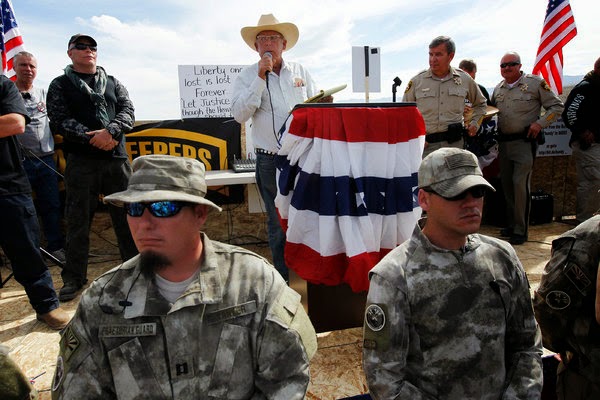 Sometimes it is delicious fun to see the crazy loons who now comprise much of the GOP base rally around a putative "hero" and then watch that supposed pillar of "real Americans" go up in flames as he/she continues to run their mouth and disclose the ugly truth about themselves.   A previous post looked at the lies that Tea Party hero Cliven Bundy has spun about his family history and "rights" to federal lands.  Now, Bundy has shown himself to be a flaming racist who thinks blacks were (still should be?) happier as slaves.  And his surprising comments on Hispanics will not sit well with many of the Tea Party crowd.  The New Civil Rights Movement looks at Bundy's batshitery towards blacks which, unfortunately reflects the thinking of much of today's GOP base.  Here are some highlights:

Cliven Bundy became an overnight hero after he refused to pay about one million dollars owed to the federal government — that means, owed to you, the taxpayer. He was a magnet for the Tea Party, those “patriots” who love their country just not the people who populate it. Bundy supporters flocked to his ranch and fended off federal authorities. He’s been a Fox News guest for weeks, Senators Rand Paul, Mike Lee and Dean Heller, Gov. Rick Perry, Fox News personalities Sean Hannity and Todd Starnes have all embraced Cliven Bundy.

But after a New York Times report published last night, Cliven Bundy is losing his flair.
He told a NY Times reporter he wanted “to tell you one more thing I know about the Negro.”  Yes, “the Negro.”

“I want to tell you one more thing I know about the Negro,” he said. Mr. Bundy recalled driving past a public-housing project in North Las Vegas, . . . . “And because they were basically on government subsidy, so now what do they do?” he asked. “They abort their young children, they put their young men in jail, because they never learned how to pick cotton. And I’ve often wondered, are they better off as slaves, picking cotton and having a family life and doing things, or are they better off under government subsidy? They didn’t get no more freedom. They got less freedom.”

And Talking Points Memo points to this bit of the Bundy interview that might just be the end of his support from the right wing. Bundy supports undocumented workers and seems to believe America needs to offer them amnesty and a path to citizenship.

“Now let me talk about the Spanish people,” Bundy said in a new video unearthed by New York magazine, right after he concluded his thoughts on “the Negro.”

“When you see those Mexican families, they’re together. They picnic together. They’re spending their time together,” he said. “I’ll tell you, in my way of thinking, they’re awful nice people. We need to have those people join us and be with us.”

Would that more of the Tea Party and the Christofascists could recognize that Hispanics - and blacks - are people too.
Posted by Michael-in-Norfolk at Friday, April 25, 2014