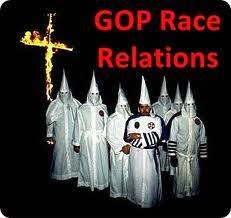 The irony?  The Republican Party of Virginia Beach which has had its problems with overt racism and seen a party chairman resign and a former chair disgraced due to crude racists "jokes" that reached the media is having its biggest fundraiser of the year for its affiliated women's' clubs - the Star Spangled Ball - this weekend at the oceanfront.  Now, the RPVB is worried that attendees may have difficulty getting to the event.

Karma can indeed be a bitch.  As for my familiarity with the Republican Party of Virginia Beach, I was the original incorporator of the entity when it incorporated and I served as its registered agent for a number of years until I finally severed all ties with the GOP because of its inability to separate Christofascist religious belief from the civil laws.  Personally, I hope the attendees of the Star Spangled Ball have one hell of a hard time getting to the event.

Posted by Michael-in-Norfolk at Wednesday, April 23, 2014