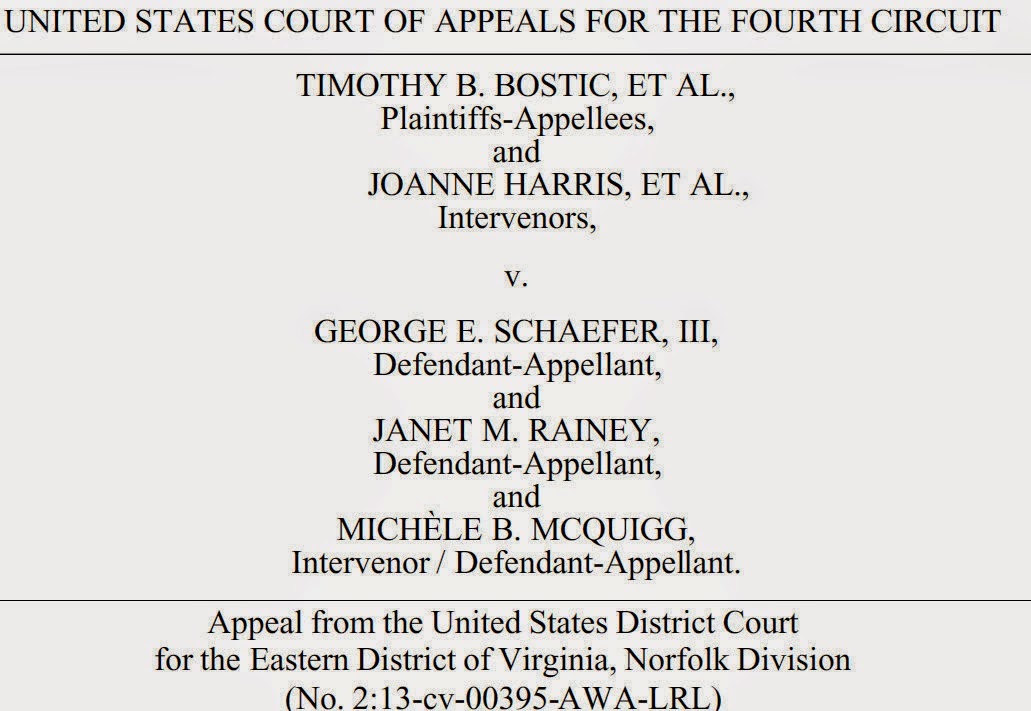 While Bostic v. Rainey has prompted briefs to be filed by a number of lunatic "family values" groups which are little more than hate groups that wrap themselves in the Bible, the pending appeal before the U.S. Court of Appeals for the Fourth Circuit has also seem many sane, legitimate organizations file amicus briefs.  Now, thirteen states and the District of Columbia have filed a brief asking the 4th Circuit to uphold the ruling that the anti-gay animus inspired Marshall-Newman Amendment is unconstitutional.  The states joining the District of Columbia on the brief are Massachusetts, California, Connecticut, Illinois, Iowa, Maine, Maryland, New Hampshire, New Mexico, New York, Oregon, Vermont, and Washington State.  The full brief can be viewed here.

Other groups filing briefs in support of the plaintiffs' position and that of Attorney General Mark Herring include NAACP, PFLAG, the Episcopal Church, the Anti-Defamation League, the American Psychological Association, the American Academy of Pediatrics, and  the Family Equality Council.  The 31 briefs filed in support of marriage equality can be found here.

In the brief filed by the American Psychological Association, among the arguments made are the following:

Although some groups and individuals have offered clinical interventions that purport to change sexual orientation from homosexual to heterosexual— sometimes called “conversion” therapies—these interventions have not been shown to be effective or safe. A review of the scientific literature by an APA task force concluded that sexual orientation change efforts are unlikely to succeed and can be harmful.

[T]the same factors are linked to children’s positive development, whether they are raised by heterosexual, lesbian, or gay parents.  Moreover, when their parents can legally marry, children benefit in terms of all three factors. Marriage facilitates positive parent-child relationships by providing children with a legal relationship to both parents. This legal relationship can provide needed security and continuity, especially during times of crisis (such as school emergencies, medical emergencies, or the incapacity or death of a parent). In addition, children benefit when their parents are financially secure, physically and  psychologically healthy, and not subjected to high levels of stress. To the extent that marriage facilitates same-sex couples’ well-being, strengthens their relationships with each other, and reduces the risk of household instability, it enhances their children’s well-being as well. Thus, Amici conclude that  permitting same-sex couples to marry is likely to have positive effects on the children they raise.

And yes, the APA slams the Regnerus "study."
Posted by Michael-in-Norfolk at Tuesday, April 22, 2014