I've noted before how some liberal Catholics and masochistic gays like Andrew Sullivan continue to swoon over Pope Francis even though he has to date not changed a single aspect of the official dogma of the Catholic Church.  Similarly, Francis has not sacked a single member of the Church hierarchy who was involved in the cover ups of sexual abuse by Catholic clergy.  Now, a new test has presented itself to Francis: Catholic bishops in Uganda have applauded that nations horrific anti-gay laws - which violate international law - and in effect called for genocide against gays.  Where is Francis' condemnation of such barbaric behavior?  So fa, Francis' silence is deafening.  A piece  by Melanie Nathan looks at the hatred being fueled by the Catholic hierarchy in Uganda.  Here are excerpts:

The Bishop of the Jinja Diocese of the Catholic Church, Bishop Rt. Rev. Fr. Charles Wamika, in today’s Easter Message  delivered at St. Chalres Lwanga Catholic Church, praised the Members of Parliament for the Anti-Homosexuality Act that provides life in prison for gay (LGBTI) people in Uganda. The Bishop called for a blessing for Uganda’s Christians who worked so hard to ‘free the land of gays.’  The Bishop also asked for parents to hand over their gay children to authorities, so they would be rewarded in heaven. I would call that a statement praising and calling for a genocide.


Since the passage of the Anti-Homosexuality Bill in Uganda, gay, lesbian, bisexual, transgender and intersex (LGBTI) people have gone into hiding. The law, which institutionalizes homophobia and affirms the persecution of LGBTI people, has been held in esteem, the highest reverence and praised by Christian leadership in Uganda, to the point of holding rallies to reward parliamentarians and the President, Yoweri Museveni.
Now a young man in hiding, challenges the Pope, Pope Francis, as the Catholic Church’s official stand in Uganda, on this Easter Sunday seems to send a message of extreme hate, exacerbating the terror felt by gays in hiding.

As this law in Uganda seems to copy the course of Nazi Germany, the scapegoating, and the forcing of a minority into camps and death, the Ann Franks of Uganda remain in terror, questioning whether the Pope will repeat the mistakes of the Catholic Church during the Hitler Holocaust?

From the voice of a young man “accused” of being gay who is in hiding in Uganda:

“The Bishop of Jinja Diocese – Bishop Rt. Rev. Fr. Charles Wamika, in today’s Easter Message  delivered at St. Chalres Lwanga Catholic Church, praised the Members of Parliament for taking a stand to see to it that the Anti-homosexuality bill passed into law, he went ahead and called on the faithful to vote for President Museveni in 2016 general elections for signing the bill into law.


He reminded the Christians that, it has been a law and he sent blessings to all Christians who have been working so hard to make Jinja a land free of gay persons. He said throughout human history the catholic church has fought evil and blood has been shed, he called on all the Christians to do whatever they can in their own means to clean this city.


I am surprised that a . . . . bishop,  . . . . uses his position to justify killing. He asked parents with gay suspected children to handle them over to authorities and their reward is in heaven. This is too much hatred.    I wonder if we will hear from the Pope on this. If not, I lose all hope.”

To my way of thinking on this Easter Sunday the Ugandan Catholic Bishop of Jinja has indeed called for the extermination of gays.  I hope Pope Francis has a great Easter while Ugandan Gays have to hear this hate sputtering from his Bishops.   I think this Bishop should be recalled and put to pasture. Perhaps a petition is called for. And what about an apology and a clear message from Pope Francis on this tragic issue.

I agree with Melanie.  Bishop Wamika needs to be defrocked and thrown penniless from the Church.  If Pope Francis fails to take such action, western Catholics will know all they need about Francis' false promise of closer adherence to the Gospel message.  He will be little better than the bishops of Nazi Germany: 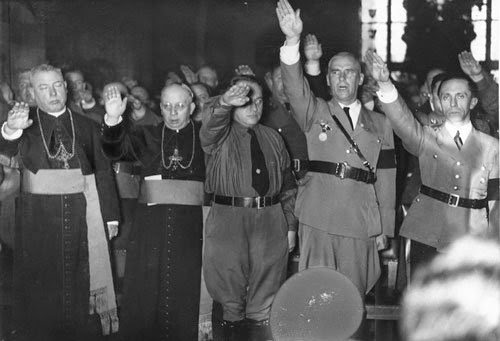