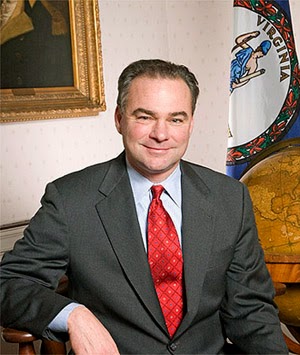 With the appeal of the ruling in Bostic v. Rainey striking down Virginia's anti-gay Marshall-Newman Amendment now before the U.S. Court of Appeals for the Fourth Circuit and oral arguments set for May 13, 2014, more and more "big guns" are coming out and making the case as to why the appellate court should affirm the lower court ruling.  In today's Virginian Pilot there is a joint op-ed  by U.S. Senator Tim Kaine of Virginia and Freedom to Marry's president Evan Wolfson -- the two were former classmates at Harvard Law School. Senator Kaine is a co-chair of Southerners for the Freedom to Marry.  Having observed the passage of the Marshall-Newman Amendment based on a campaign of lies, disinformation and anti-gay hatred wrapped in the garb of "religious belief," if the 4th Circuit is true to Jefferson's ideals and the legacy of Loving v. Virginia, this foul amendment needs to be thrown on the trash heap of history along side the Jim Crow laws which were vigorously defended by the "godly folks."  Here are highlights from the op-ed:

When Thomas Jefferson wrote the words "all men are created equal" in the Declaration of Independence, he put in place a moral standard that will always challenge us to be better people.

Our founders passionately believed in equality, but most saw no contradiction between that belief and slavery. It took 90 years and a civil war to correct that injustice.

The post-Civil War Congress that changed the Constitution to abolish slavery passionately believed in equality, but most saw no contradiction in women's inability to vote. It took nearly 70 years to remedy that injustice.

Today, Virginians and Americans are advancing Jefferson's equality principle by re-thinking laws that limit the freedom to marry.

The two of us first became friends in law school more than 30 years ago. Our career and personal paths have taken different directions. But we share a commitment to making people's lives better, their dreams more attainable and their families stronger.

And we share a commitment to Jefferson's farsighted ideal. That's why we look forward to the day when all loving couples, regardless of sexual orientation, can marry.

In recent months, 11 out of 11 federal judges have ruled against marriage discrimination.
In February, a federal judge in Norfolk was one of them.

The Loving decision rightly proclaimed: "The freedom to marry has long been recognized as one of the vital personal rights essential to the orderly pursuit of happiness by free men."

These favorable rulings are part of a continuing momentum across the country.

We act in our best traditions when we move closer to Jefferson's equality ideal. That has been our history from 1776 to today.  We will honor that history by making sure that all have the freedom to marry.