The Double Standards in Bankruptcies - Why Do Banks Get Special Treatment? 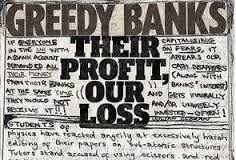 With the city of Detroit filing bankruptcy the spotlight is being focused on the unequal application of the bankruptcy laws to seemingly everyone else other than the big banks.  When the financial markets collapsed largely because of the utter recklessness and in some cases outright fraud of the big banks and mortgage companies, the big banks got bailed out with tax payer money and were supposed to pass along relief to beleaguered homeowners - something that from what I have seen in the real estate industry simply never happened.  The banks were quick to take the taxpayer funds but have made a practice of screwing over homeowners in loan modifications and have shown little regard for the properties they tossed off to HUD and the VA to deal with.  Yet in Detroit's case, we are seeing a whole different standard.  The New York Times looks at the troubling situation.  Here are excerpts:

Developments in the Detroit bankruptcy have exposed a double standard in federal bankruptcy law, an injustice in urgent need of congressional reform.

In Detroit, the judge has ruled that under Chapter 9 of the bankruptcy law, the city’s creditors include even municipal pensioners whose payouts are guaranteed under the Michigan Constitution. Accordingly, the pensioners have reached a tentative deal to reduce retiree benefits; along with concessions made by other creditors, the goal is to help the debtor, the city of Detroit, get a fresh start and move forward.

Contrast that with what happened in the housing bust. The creditors in that fiasco — including powerful banks — did not have to cut deals in court with bankrupt homeowners. Under Chapter 13 of the bankruptcy law, a section heavily influenced by the financial industry, lenders cannot be forced to rework most residential mortgages in bankruptcy.

That is where the legal double standard comes in. In Detroit’s bust, even pensioners have to negotiate new terms; in the housing bust, big banks did not have to negotiate, leaving many homeowners in the dust.

That special treatment for banks may have helped them recover from the financial crisis. But it made things worse for borrowers and the economy. Today, 8.6 million homeowners still owe more on their mortgages than their homes are worth, for a total of $430 billion in negative equity, according to Moody’s Analytics. Some 2.1 million of the underwater homeowners are in or near foreclosure, on top of 9.6 million who have lost their homes since 2007.

Congress could have changed the law early in the financial crisis to allow for bankruptcy court relief for homeowners. Its refusal to do so has contributed to unnecessary impoverishment and a protracted weak recovery.

Congress must change the bankruptcy law to ensure that banks have to modify mortgages in court for bankrupt borrowers. Anything less violates bankruptcy’s tough principles of shared pain for creditors and second chances for debtors.

Yes, I hold the banking industry in low regard.  The banking system and Wall Street created the financial crisis and except in the cases of relative small banks where decision makers have been prosecuted and gone to jail, NO ONE in the big banks or on Wall Street has been similarly prosecuted.  Something is seriously wrong with this picture.