We Are Married - Wedding Reflections Pt 2 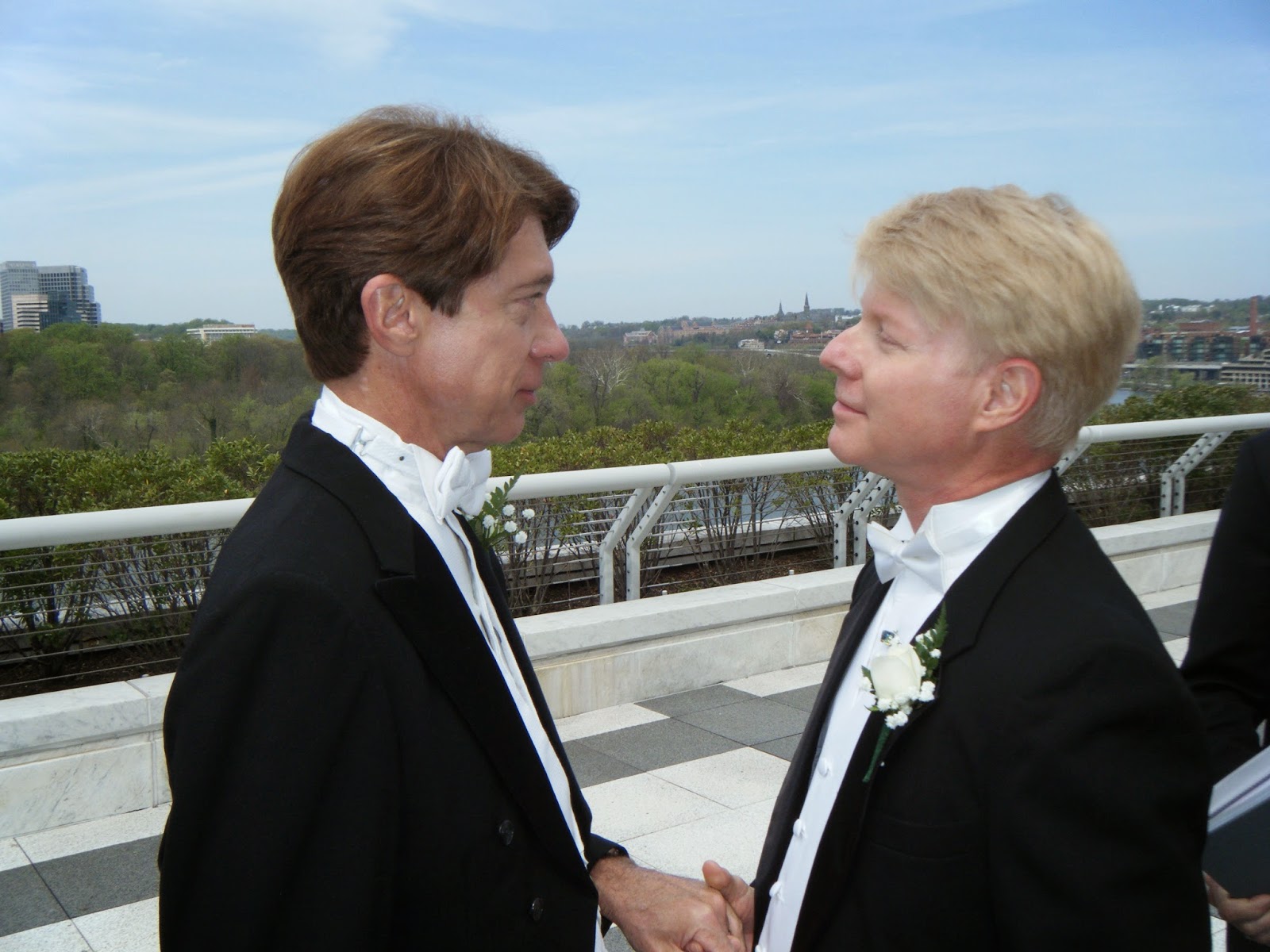 The reaction to my post yesterday-  and a link to it that I put on Facebook - about our wedding in Washington, D.C., has been amazing and overwhelmingly supportive.  I've literally heard from people I haven't heard from in a long time.   My husband has had a similar experience with his clients and Facebook friends.  We are both looking forward to the reception for family and friends this summer when we will get to celebrate with those unable to be with us in Washington, D.C.

I've been asked repeatedly whether or not I/we feel any different.  The simple answer is "Not really."  We have been together for nearly six years and have lived together for a little over five years.  Our day to day routines will change very little in reality.  But on a different level, things have changed completely.  The government of the United States of America and its agencies recognize us as married spouses and we now are entitled to all the federal benefits that go along with such recognition.  Moreover, while Virginia ay still refuse to recognize the legal status of our relationship, our friends and neighbors and many others now see us as lawfully married.  It is a huge difference:

The other thing that is different is that when we were married yesterday, I had no concerns about conforming to societal expectations.  Thankfully, I have put concerns for what others will think behind me.  Indeed, one could argue that by getting married we both ignored traditional societal expectations - or at least those that were the norm when I married my former wife.

Those many years ago when I married my former wife - who I truly hope has found happiness - I was deep in denial to myself and everyone else as to who I really was and who I was attracted to and likely to fall in love with.   With homosexuality literally classified as a form of mental illness until my last year of college, being gay was just something too horrible to contemplate.  Particularly when you added in my Roman Catholic upbringing.  The result? An endless struggle to be "what was expected" and to "change myself."  It did not work in the long run.  Perhaps my first marriage was fated to happen since three wonderful children were the outcome.  Yet I hurt my former wife and suffered silently for decades with self-loathing and self-hate because I could not "change" as the Church and the ex-gay ministries promised could be the case.

Thankfully, I am long past where I was when I first started this blog.  Readers from those early years will likely recall some of the dark posts - and even the suicide attempts.  Amazingly, I have now achieved the image of what I longed for when I first began the coming out process: I am in a committed, legally recognized relationship with a wonderful man who I love deeply and, mercifully, I am on good terms with my three children who we referenced in our wedding ceremony and vowed to embrace as our common children.

My message to others making the journey I made is to think positive.  What you seek is possible.  As for the ex-gay quacks and charlatans, I hold them in utter contempt.  For the love of money and a psychological sickness they continue to ruin the lives of so many, including straight spouses who they apparently view as acceptable collateral damage.  We all need to live our lives as we are and as the Creator made us to be.