Chris Kluwe: Minnesota Vikings Fired Me Because Of My Gay Marriage Activism 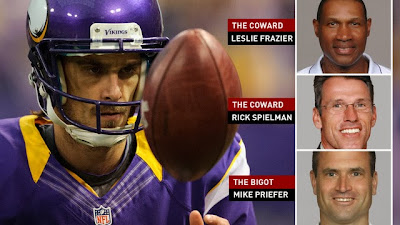 In addition to the gay rumors swirling around Green Bay Packers quarterback Aaron Rodgers, another gay related shit storm is raging in pro football circles as former  Minnesota Vikings punter Chris Kluwe is saying that he was fired by the Vikings because of his outspoken activism opposing Minnesota's anti-gay marriage amendment.  Via Joe My God, Kluwe said:

"Hello. My name is Chris Kluwe, and for eight years I was the punter for the Minnesota Vikings. In May 2013, the Vikings released me from the team. At the time, quite a few people asked me if I thought it was because of my recent activism for same-sex marriage rights, and I was very careful in how I answered the question. My answer, verbatim, was always, 'I honestly don't know, because I'm not in those meetings with the coaches and administrative people.' This is a true answer. I honestly don't know if my activism was the reason I got fired. However, I'm pretty confident it was. [snip]

It's my belief, based on everything that happened over the course of 2012, that I was fired by Mike Priefer, a bigot who didn't agree with the cause I was working for, and two cowards, Leslie Frazier and Rick Spielman, both of whom knew I was a good punter and would remain a good punter for the foreseeable future, as my numbers over my eight-year career had shown, but who lacked the fortitude to disagree with Mike Priefer on a touchy subject matter."

As one might expect, the Vikings and their sycophants are vehemently denying Kluwe's allegations.    To be honest, I suspect that Kluwe is 100% on the money, especially because of this:

On Sept. 8, the head coach of the Vikings, Leslie Frazier, called me into his office after our morning special-teams meeting. I anticipated it would be about the letter (punters aren't generally called into the principal's office). Once inside, Coach Frazier immediately told me that I "needed to be quiet, and stop speaking out on this stuff" (referring to my support for same-sex marriage rights). I told Coach Frazier that I felt it was the right thing to do (what with supporting equality and all), and I also told him that one of his main coaching points to us was to be "good men" and to "do the right thing." He reiterated his fervent desire for me to cease speaking on the subject, stating that "a wise coach once told me there are two things you don't talk about in the NFL, politics and religion." I repeated my stance that this was the right thing to do, that equality is not something to be denied anyone, and that I would not promise to cease speaking out. At that point, Coach Frazier told me in a flat voice, "If that's what you feel you have to do," and the meeting ended. The atmosphere was tense as I left the room.

Throughout the months of September, October, and November, Minnesota Vikings special-teams coordinator Mike Priefer would use homophobic language in my presence. He had not done so during minicamps or fall camp that year, nor had he done so during the 2011 season. He would ask me if I had written any letters defending "the gays" recently and denounce as disgusting the idea that two men would kiss, and he would constantly belittle or demean any idea of acceptance or tolerance. I tried to laugh these off while also responding with the notion that perhaps they were human beings who deserved to be treated as human beings. Mike Priefer also said on multiple occasions that I would wind up burning in hell with the gays, and that the only truth was Jesus Christ and the Bible. . . . . I felt uncomfortable each time Mike Priefer said these things. After all, he was directly responsible for reviewing my job performance, but I hoped that after the vote concluded in Minnesota his behavior would taper off and eventually stop.

Near the end of November, several teammates and I were walking into a specialist meeting with Coach Priefer. We were laughing over one of the recent articles I had written supporting same-sex marriage rights, and one of my teammates made a joking remark about me leading the Pride parade. As we sat down in our chairs, Mike Priefer, in one of the meanest voices I can ever recall hearing, said: "We should round up all the gays, send them to an island, and then nuke it until it glows." The room grew intensely quiet, and none of the players said a word for the rest of the meeting. The atmosphere was decidedly tense. I had never had an interaction that hostile with any of my teammates on this issue—some didn't agree with me, but our conversations were always civil and respectful. Afterward, several told me that what Mike Priefer had said was "messed up."

The Christofascists and those who pander to them feel free to say and do whatever they want and the rest of society is supposed to bow and give deference to their "deeply held religious beliefs."  Yet when others stand by their deeply held beliefs, look out if those beliefs offend the hate filled Christofascists.  For the record, I hold most pro sports in contempt.  But football is among the worse and, candidly, the game reminds me of an updated version of gladiatorial games with some of the players having intelligence levels that would embarrass draft animals.  For that matter, these players are as ignorant as the "godly Christian" folks who believe that the Bible is inerrant.