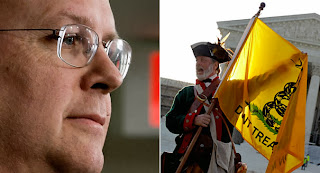 The ongoing warfare within the Republican Party continues to provide an entertaining spectator sport as the so-called Republican establishment strives to fight off the Frankenstein monster it created when the establishment shortsightedly allowed the influx of the Christofascists and the Tea Party (a repackaged version of the Christofascists) into city and county committees and caucuses.  Besides primary contests by deranged GOP candidates who have gulped down far too much laced Kool-Aid, the intra-party battles have spilled over into fights about money, or more accurately, who is going to monopolize PAC money.  As the New York Times reports, upstart groups are challenging Karl Rove in the money race.  Here are article highlights:


A quiet but intense struggle over money and influence is roiling the Republican Party just as the 2014 election season is getting underway.


At least a dozen “super PACs” are setting up to back individual Republican candidates for the United States Senate, challenging the strategic and financial dominance that Karl Rove and the group he co-founded, American Crossroads, have enjoyed ever since the Supreme Court’s Citizens United decision in 2010 cleared the way for unlimited independent spending.

In wooing donors, the new groups — in states like Texas, Iowa, West Virginia and Louisiana — are exploiting Crossroads’ poor showing in 2012, when $300 million spent by the super PAC and a sister nonprofit group yielded few victories. Some are suggesting that Crossroads’ deep ties to the Republican establishment and recent clashes with conservative activists are a potential liability for Republican incumbents facing Tea Party challengers.

The conflicts echo broader unease within Republican circles, as establishment figures like Mr. Rove seek to reassert their authority and expand the party’s appeal amid a searing internal assault from Tea Party-inspired conservatives.

The fragmentation threatens not only the position of Mr. Rove and Crossroads as the dominant Republican players in the world of outside spending, but also the hundreds of millions of dollars’ worth of business that has flowed from Crossroads to a small circle of consultants and advertising buyers.

[S]ome potential pitfalls for the new groups are already evident. Because they are raising money chiefly from local donors, they may be more vulnerable to criticisms of pay-to-play. One of the groups, Grow NC Strong, has already drawn scrutiny for raising large contributions from three donors, including Mr. Mitchell, who were appointed last spring to the University of North Carolina board of governors by a vote of the House.

Moreover, it is not always clear which groups have the blessing, informal or otherwise, of the candidates in whose name they were founded.

Posted by Michael-in-Norfolk at Sunday, December 29, 2013