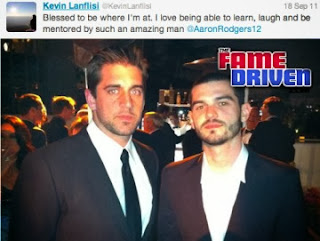 The saying goes that "Hell hath no fury like a woman scorned."  Well, that apparently also applies in the gay world with angry ex-boyfriends.  Or at least that is the rumor swirling about concerning Super Bowl MVP winner Aaron Rodgers and Kevin Lanflisi, the man who worked as Rodgers’ “personal assistant.”  Time will tell whether or not the rumors are true, of course.  Meanwhile, homophobes among the pro footabll watching set will likely have their panties in a wad.  Here are excerpts from Queerity:


Rumors are swirling that Green Bay Packers quarterback Aaron Rodgers was one of the NFL stars expected to come out of the closet this summer, and a cyber sleuth site is all but confirming it with a wealth of dirt that suggests he’s also in a gay relationship.

The Fame Driven was apparently tipped off by an anonymous “spy,” who pointed to a number of now-deleted tweets from the Twitter account of Kevin Lanflisi, the man who worked as Rodgers’ “personal assistant” and lived in his home as “a roommate” for the last several years. (Kinda like Kerry Rhodes and his “friend”…)

According to the spy:


Aaron has attended numerous sports award shows with Kevin, always color coordinated and without any double female dates, including the ESPY’s. Kevin was also the first person Aaron embraced when the Packers won the Super-bowl in 2011. I just find it really strange that as of late there has been many bitter subliminal tweets on Kevin Lanflisi’s twitter alluding to a relationship much deeper than a friendship he had, with who I perceive to be Aaron Rodgers, because Kevin has NEVER once tweeted about having a girlfriend, just mainly about the Green Bay Packers, Aaron Rodgers, and Justin Bieber’s music and sitting front row at Bieber’s concert. There has been speculation for years here in Wisconsin that Aaron is gay.

Rodgers first referred to the super-cute Lanflisi as his “roommate” in a 2008 interview with Sporting News, saying they “just hit it off” when Lanflisi was interning for the Packers. “He’s been great for me as far as great conversations outside of football,” he said. “Our friendship goes a lot deeper than what we do.”

A source close to the couple also claimed their relationship is now in turmoil as a result of the botched mass NFL outing scheduled over the summer. Aaron Rodgers was allegedly one of the men involved, and his backing out at the last minute infuriated Lanflisi, shattering their relationship.

If their rumored relationship is actually fact, the truth could come sooner than we’d have thought. In the words of Kevin Lanflisi himself, “Silence always comes with an expiration date..”

If the rumors are true, they highlight one of the soul-killing aspects of being in the closet - the constant fear of outing and never being able to live one's life honestly.  If the rumors are true, I also wish the best of luck to both Rodgers and Lanflisi.  Hopefully, some day being gay will be a non-issue.