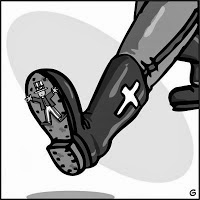 One euphemism that the media uses that drives me crazy is the term "social conservatives."  God forbid that this element of the population be accurately described to reveal their true agenda: a near theocracy that enshrines their fear and hate based religious views in the civil laws to which all others must submit and conform.  The people are those I call the Christofascists.  Now, with the GOP engaged in a near civil war between the so-called GOP establishment and the ignorance embracing Christofascist/Tea Party element of the party, the Christofascists are making plans to spend big money to try to seize full control of the GOP.  Given the players involved, Americans who value knowledge, logic, reason and religious freedom for all ought to be concerned.  A piece in Politico looks at the plans being hatched to try to seize full control of the GOP.  Here are detailed excerpts:

On a recent snowy day in the Washington suburb of Tysons Corner in Northern Virginia, some of the religious right’s wealthiest backers and top operatives gathered at the Ritz-Carlton to plot their entry into the conservative civil war.

Their plan: take a page out of the playbooks of Karl Rove and the Koch brothers by raising millions of dollars, coordinating their political spending and assiduously courting megadonors.


Plans in the works range from aggressive super PAC spending in primaries against Republicans deemed squishy on social issues, to holding a donor conference in Normandy, France, tied to the 70th anniversary of the D-Day invasion.

It’s all geared toward elevating the place of social issues like abortion and gay marriage in conservative politics. They’ve been largely relegated to the sidelines as the business wing of the GOP establishment wages a bitter and expensive struggle against the tea party for the soul of the Republican Party.

The Republican National Committee even issued a post-2012 autopsy report declaring: “When it comes to social issues, the Party must in fact and deed be inclusive and welcoming,” lest it turn off young voters and women.  That analysis reflects the perspective of the Republican megadonor class, but not the GOP’s base, argued Frank Cannon, who participated in the Ritz summit and runs an outfit called American Principles Project.


The Ritz summit was intended to help change that. It was organized by the Conservative Action Project, an initiative funded by the secretive Council on National Policy and chaired by former Reagan Attorney General Ed Meese that brings together conservative leaders and donors to try to shape the movement.

The event was by invitation only and was closed to reporters. But POLITICO reviewed an agenda and guest list and staked out an adjacent lobby where participants held informal breakout meetings and munched on a lunch spread featuring soups, salads, and roast turkey sliders with brie, arugula, vine-ripened tomatoes and spicy mustard on pretzel roll buns.

The roughly 25 socially conservative groups represented at the Ritz — including Cannon’s, as well as Gary Bauer’s American Values outfit, James Dobson’s Focus on the Family, Ralph Reed’s Faith and Freedom Coalition, Americans United for Life, the Family Research Council and the National Organization for Marriage — combined to pull in at least $280 million in 2011 and 2012, according to publicly available tax and campaign filings.


“There are enough people out there that are pro-life and pro-family that have the resources to fund political efforts on those issues, and for a variety of reasons they just haven’t stepped up and so we have to do a better job of getting them to step up,” said Bauer . . .

That was the subject of an informal strategy session on the sidelines of the Ritz summit including Bauer, South Dakota businessman Bob Fischer, Tennessee donor Joe Gregory, operative Pam Pryor, fundraiser Richard Norman and others. Among the topics discussed was coaxing support from megadonors aligned with the Koch and Rove networks, partly by highlighting the paltry 2012 rate of return of the groups in those networks.

Fischer referred questions about his effort to Tony Perkins, president of the Family Research Council, who did not respond to POLITICO’s inquiry. But Fischer in his private conversations has singled out the possibility of a long-shot Perkins 2014 Senate candidacy in Louisiana as just the sort of campaign that the new effort could support.

A Perkins campaign would make an interesting test case, since he would be pitted against Rep. Bill Cassidy, who has been singled out as a rising star by Rove’s Crossroads groups and is the GOP establishment’s choice to take on Democratic Sen. Mary Landrieu.

Rove has counseled Republicans to approach cultural issues cautiously, and he attributed social conservative Ken Cuccinelli’s recent loss in the Virginia governors’ race partly to the “polarizing language and an acerbic tone” he used in addressing those issues.

American Principles In Action’s paper, issued in October, argued that such a tactic [i.e., downplaying social issues] “would likely consign the GOP to a permanent minority status,” whereas emphasizing social issues will help rally the base and attract coveted demographics with which the GOP has struggled, including Hispanics and women.

”Social conservatives need to take things into their own hands and can’t rely on the establishment to make that case to donors or voters,” said Cannon, who managed Bauer’s long-shot 2000 presidential campaign. “We need to alert donors who care about social issues that, without financial support behind those issues themselves, you have a consulting class of the party that’s decided that those issues need to be jettisoned.”

He told POLITICO there’s a chance to reorder the conservative movement — and American politics as a whole — by revealing Democrats to be “their own worst enemy” on social issues like abortion and gay marriage.

“The rigidity and extremism they have around some of these issues is so out of step with the American electorate that there is enormous opportunity for Republicans. We have to pick some spots and win some elections and frame the debate in a way that’s favorable to us,” he said, predicting that a win or two in 2014 in purple states would yield big things in 2016.

Thankfully, Virginia's recent elections seem to argue directly against the agenda that the Christofascists want to pursue.  The extreme social positions embraced by  Cuccinelli-Jackson- Obenshain drove women away in droves.  Just as the far right's anti-immigrant jihad drove away minority voters, including Hispanics.