Quote of the Day: Jon Huntsman - Conservatives Should Lead the Push for Gay Marriage 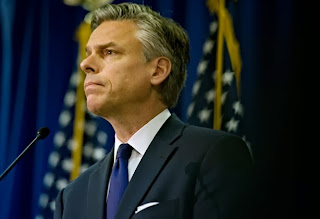 This blog and other outlets have argued that gay marriage is a conservative institution and that true conservatives - as opposed to religious extremists and the political whores that pander to them - should support gay marriage because it encourages stable committed relationships.  Outside of gay activists and some converts such as attorney Ted Olson, too many politicians are afraid to state this truth out of fear of the wrath of the animus filled gay haters of the Christian Right.  One who is not plagued by such fears is former Utah Governor and former GOP presidential candidate Jon Huntsman who as Andrew Sullivan reports has made the following remarks:

While serving as governor of Utah, I pushed for civil unions and expanded reciprocal benefits for gay citizens. I did so not because of political pressure—indeed, at the time 70 percent of Utahns were opposed—but because as governor my role was to work for everybody, even those who didn’t have access to a powerful lobby. Civil unions, I believed, were a practical step that would bring all citizens more fully into the fabric of a state they already were—and always had been—a part of.

That was four years ago. Today we have an opportunity to do more: conservatives should start to lead again and push their states to join the nine others that allow all their citizens to marry. I’ve been married for 29 years. My marriage has been the greatest joy of my life. There is nothing conservative about denying other Americans the ability to forge that same relationship with the person they love.

I continue to believe that if the GOP had been smart (and not dominated by Christofascists) it would have nominated Huntsman rather than Mitt Romney.  Huntsman is someone I likely could have supported.  Moreover, he might have beat Obama.  Unfortunately, today's GOP is not focused on winning elections but instead on enforcing extremer religious dogma.
Posted by Michael-in-Norfolk at Thursday, January 02, 2014