Report Undermines Claims That Millions Will Lose Coverage Due To Obamacare 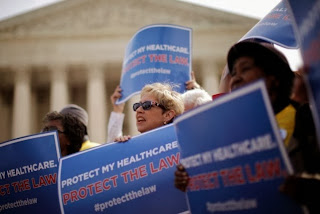 The Congressional Republicans and various talking heads of the far right continue to run around predicting that the sky is falling because of the Affordable Health Care Act, a/k/a Obamacare.  In addition, they claim that millions of Americans will lose coverage under Obamacare and, of course, little or nothing is said about the benefits that are being brought to millions of Americans.  A new report looks at the GOP claims and disproves the claim that millions will lose coverage.  Here are excerpts from a piece in Think Progress that reviews the report's findings:

Obamacare’s detractors have argued that millions of Americans will lose their health coverage due to the changes introduced by Obamacare. But according to a new analysis, this ignores counterbalancing policies in the law. The report finds that less than 10,000 people will lose coverage coverage without an immediate and affordable replacement.

[F]or the vast major that 4.7 million, the cancellation of a plan simply means a shift into a new and often better form of coverage. The report lays out three ways this happens.

First, there’s the extended grandfather period. Even before Obamacare was enacted, health plans on the individual market — which usually operate on year-long contracts — changed on consumers all the time. Benefits could be altered or premiums jacked up. In order to give consumers more reliability, Obamacare placed much tighter controls on how and why insurers may charge different customers different premiums, and mandated a core package of benefits all plans must provide. Unfortunately, this also meant many pre-Obamacare plans that didn't meet those new qualifications would have to be cancelled. In order to smooth that transition, the law allowed insurers to “grandfather” in certain pre-Obamacare plans by allowing them to be renewed for one more year at any point in 2013.

Second, there’s Obamacare’s subsidies and Medicaid. In order to help Americans better afford coverage on the individual, Obamacare provides tax credits to anyone on the exchanges making between 100 and 400 percent of the federal poverty level (FPL). That’s between $23,000 and $94,000 for a family of four. Over half of all married couples made $75,678 or less in 2012. Obamacare also provided the states the resources to expand Medicaid to anyone making up to 138 percent of the FPL.

Citing analysis by the Kaiser Family Foundation, the Democrats’ report estimates that 60 percent of the 2.35 million who can’t take advantage of the extension will either qualify for subsidies or for the Medicaid expansion. That’s another 1.4 million out of the original 4.7 million cited by the AP. That number would be even larger if it weren’t for the states that refused the Medicaid expansion.

Third, there’s access to catastrophic coverage. Another failsafe built into Obamacare was the possibility of a “hardship exemption” for any American who faced serious hurdles in complying the law’s mandate that everyone purchase health coverage. In December, the administration decided that exemption applied to anyone who’d seen their previous coverage cancelled due to Obamacare’s policy changes. That means they won’t be subject to the mandate’s penalty, and that they’ll be allowed to purchase cheaper “catastrophic coverage” along with the Obamacare-compliant plans on the exchanges.

The new report found that of the 2.35 million who can’t renew their pre-Obamacare plans through 2014, 99 percent will have the option to buy low-cost catastrophic coverage.

The fact is the plan “cancellations” were a regular occurrence on the individual market even before Obamacare, as customers saw plans changed or terminated and had to enroll in new ones. Studies have found that one third in the individual market left their coverage after only one year, and over 80 percent did not stay in their coverage longer than two years. The initial shift into coverage that complies with Obamacare can look like an acceleration of all that, but the law also introduced a host of new policies to make coverage more accessible, affordable and stable going forward.

As I have noted before, the real solution is a universal single payer  system.  As written, Obamacare continues to leave individuals and families at the mercy of the insurance industry.  It simple made the system less brutal and limited the arbitrary and capricious behavior of insurers somewhat.