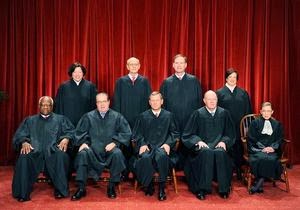 Republicans in Utah continue to squander taxpayer monies in an effort to block same sex marriages from being performed while the state of Utah appeals the federal District Court ruling that struck down Utah's bans on gay marriage that in the last analysis have anti-gay animus and religious based hatred as their justification.   Today, Utah asked the U.S. Supreme Court to stay the District Court ruling after the 10th Circuit Court of Appeals twice refused to grant a stay.  The state's filing can be viewed here.  The Salt Lake Tribune has details.  Here are story excerpts:

The state of Utah asked the U.S. Supreme Court on Tuesday afternoon to put same-sex marriages in Utah on hold while it appeals a lower court ruling in the 10th Circuit Court of Appeals, saying each marriage that occurs is "an affront" to the state’s and the public’s interest "in being able to define marriage through ordinary democratic channels."

In its application, Utah said a stay is warranted because the dispute over U.S. District Court Judge Robert J. Shelby’s Dec. 20 ruling "squarely presents the question that this court expressly left open last term in United States v. Windsor." That is: Do states retain a "historical and essential" authority to define the marital relation? In the Windsor case, the court upheld a state’s authority to make laws regarding marriage, Utah argues.

Monte N. Stewart, a Boise attorney and founder of the Marriage Law Foundation, joined the Utah Attorney General’s Office in making the application — the state’s fifth attempt to block same-sex marriage in Utah while it appeals Shelby’s ruling. It also posted a notice Tuesday seeking an outside firm’s help.

Attorney James E. Magleby, who with Peggy A. Tomsic represents the three couples that challenged Utah’s ban, criticized the state’s continued push for a stay, particularly given the 10th Circuit Court of Appeals expedited schedule to hear the case.

"We are disappointed that the state of Utah will spend millions of dollars in taxpayers’ money to attempt to reinstate laws which deny due process and equal protection to all of Utah’s citizens," Magleby said in a statement. "It doesn’t have to be this way."

Magleby held out the example of New Jersey Gov. Chris Christie, who this fall declined to appeal a similiar ruling and instead "put a divisive issue in the past."

Associate Justice Sonia Sotomayor, who is assigned oversight of cases arising from the 10th Circuit, has given attorneys for the three same-sex couples until 10 a.m. on Friday to file a response to the state’s stay request.

Sotomayor may review the application on her own or refer it to the full court. If Sotomayor decides it on her own and declines to grant a stay, the state could then seek an opinion from another justice; by tradition that justice would refer it to the whole court for consideration.


In reviewing a stay request, the court considers four general criteria: likelihood that four justices will find the case meritorious enough to grant certiorari on appeal; whether there is a "fair prospect" a majority would reverse the lower court’s decision; irreparable harm caused if a stay is denied; and, in close calls, relative harms to the applicant, respondent and public interests.

Unlike the Hollingsworth v Perry case, the California Proposition 8 case the court heard last March but later declined to rule on because of standing issues, there are no jurisdictional defects in Utah’s case, the state said.

And Utah's final justification for anti-gay bigotry sounds as if it were written by Tony Perkins or some other hate group leader:

A state that allows same-sex marriage "necessarily loses much of its ability to encourage gender complementarity as the preferred parenting arrangement," the state said. "And it thereby substantially increases the likelihood that any given child will be raised without the everyday influence of his or her biological mother and father — and indeed, without the everyday influence of a father or a mother at all."

The state apparently has amnesia in terms of all the unfit heterosexual couples who have children - children who are abused and denied proper health care and other basic needs.