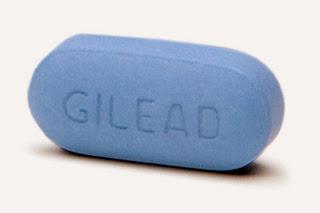 A piece in the New York Times looks at the failure of an effective HIV preventative pill to gain wide traction in the LGBT community.  The article recites a number of possible reasons but I suspect that perhaps the largest is the cost - roughly $1,000 per month.  Even with decent insurance, the out of pocket cost is beyond the reach of many.  The phenomenon is part and parcel with America's ass backwards approach to health care: skimp on preventative care and then have to face huge costs once severe conditions have developed.   It's a kin to never maintaining one's house and then being shocked when suddenly huge repair costs become unavoidable.  There is also the possible fear by many with job derived health care coverage that use of the preventative may cause one to be stigmatized.  Lastly, some HIV/AIDS organizations have opposed use of the drug fearing that it may encourage risky practices - a mindset akin to the Christofascists' opposition to reality based sex education in favor of abstinence only programs.  Just like unwanted pregnancies, risky behavior will continue, so why not prepare for it?  Here are article highlights:

[A] daily pill that studies show is highly effective in protecting people from infection.


The very existence of that option represents a startling turn in the too-long history of the AIDS epidemic. Many health experts hoped that the medication — Truvada, a combination of two antiviral drugs that has been used to treat H.I.V. since 2004 — would be exuberantly embraced by H.I.V.-negative gay men. Instead, Truvada has been slow to catch on as an H.I.V. preventive in the 18 months since the strategy’s approval by the Food and Drug Administration. In some quarters, the idea that healthy gay men should take a medication to prevent infection — an approach called pre-exposure prophylaxis, or PrEP — has met with hostility or indifference.

“It’s gotten tons of attention at H.I.V. meetings as a new tool for prevention, and I consider it an important option for the right person,” said Dr. Lisa Capaldini, a primary care doctor here who treats many gay men. “And yet there’s been very little interest among my patients. There’s a fascinating disconnect.”


Many experts hailed Truvada as an opportunity to reduce new infections among high-risk groups like young gay men, people in relationships with H.I.V.-positive partners, and prostitutes. The F.D.A. called for prescriptions to be accompanied by counseling, frequent H.I.V. testing, and continued promotion of safer sex, although research suggests that daily use of the pill alone confers close to full protection.

For many gay men, and for some public health officials, the new option has brought both hope and confusion.

“We’ve had several decades of the recommendation to use condoms,” said Dr. Kenneth H. Mayer, a professor of medicine at Harvard University and the medical research director at Fenway Health, a community center in Boston with many lesbian and gay patients. “Now we’re saying, ‘Here’s a pill that might protect you if you don’t use condoms.’ So it’s flying in the face of community norms.”


Certainly, fewer people have tried PrEP than many experts had anticipated. . . . So why haven’t more gay men signed up?

Some men have reported receiving negative reactions from their health care providers when they brought it up. Use of the drug as a preventive can be stigmatizing among gay men as well: the term “Truvada whore” has been bandied about on some social networks.

And many simply may not know much about the strategy.

Potential side effects like kidney damage and a loss of bone density, although rare, are also a concern. And Truvada is expensive: more than $1,000 a month. So far, private and public insurers, including state Medicaid programs, have generally covered the drug for prevention.

But a generational shift in attitudes toward H.I.V. among gay men may also be playing a role, some experts say. With advances in treatment, many younger men who did not experience the worst years of the epidemic are less fearful of the consequences of infection. Moreover, current medications can lower viral levels in H.I.V.-positive people to the point where the risk of transmission is negligible, further reducing the perceived need for PrEP among H.I.V.-negative partners.


Adherence to the drug regimen is another thorny issue. The major trial that confirmed Truvada as an effective H.I.V. preventive among men who have sex with men, also found that many participants did not take the pill every day, leaving them more vulnerable to infection.

Michael Weinstein, president of the AIDS Healthcare Foundation, warned that drug adherence will continue to be a problem, likely leading to more infections and the emergence of drug-resistant H.I.V. strains. “If you don’t take the medication every day and you don’t use condoms, and you’re highly sexually active, you’re going to get infected,” Mr. Weinstein said.


In any event, the protocol for pre-exposure prophylaxis is itself likely to undergo significant changes as findings emerge from current and upcoming research into other formulations of Truvada such as gels or injectables, less frequent dosing regimens, and the use of other medications altogether.