Thanks to the GOP, Five Million Americans Won't Get Health Insurance 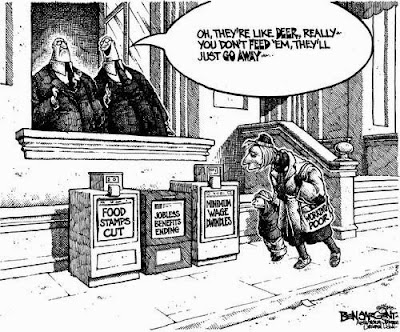 As the year 2013 comes to a close, it is worthwhile to recall one last time some of the "gifts" that the Republican Party has bestowed on Americans: (i) an economy that is still struggling thanks to GOP opposition to economic stimulus and drastic cuts in spending at the state and federal level, (ii) over  one million unemployed workers who have been kicked to the curb and cut off from emergency assistance, (iii) the continued degradation of the separation of church and state, (iv) no progress on comprehensive immigration reform, and (v) over five million Americans who will not receive health insurance.  A piece in The Daily Beast looks at this last "gift" to the American people:

Do you need health care coverage? Are you too “rich” to qualify for Medicaid but too poor to receive subsidies under the Affordable Care Act? Do you live in a Republican-controlled state? If you answered yes to all of the above, then you’re out-of-luck. Here’s the Associated Press:

About 5 million people will be without health care next year that they would have gotten simply if they lived somewhere else in America. […]

The court effectively left it up to states to decide whether to open Medicaid, the federal-state program for the poor and disabled, to more people, primarily poor working adults without children.

Twenty-five states declined. That leaves 4.8 million people in those states without the health care coverage that their peers elsewhere are getting through the expansion of Medicaid, according to a Kaiser Family Foundation estimate. More than one-fifth of them live in Texas alone, Kaiser’s analysis found.

This will impact as many people as the disruption in the private insurance market that generated a month’s worth of outrage over President Obama’s (broken) promise that “If you like your plan, you can keep it.” The key difference, however, is that . . . .  these Americans—who, barring a change in the law, are stuck in the coverage—are poor, marginalized, and ignored.

On that note, in fact, it should be said that this gap will deepen existing racial inequalities: The 25 states that have rejected the expansion are home to the majority of the nation’s poor, uninsured blacks, a direct product of our long history of racist policy making.

The Republican Party is the reason these people won’t receive health insurance and gain access to valuable medical services. The Medicaid expansion is fully funded by the federal government for the first three years, and mostly funded after that. It’s a win-win for the state and its residents. But in the twenty-five states that won’t participate, the GOP governors and legislators would rather deprive their citizens of needed benefits than cooperate with President Obama and the Affordable Care Act.

Remember this when Republicans insist they have an agenda for low-income families; if that were true, the party wouldn’t be united in denying health insurance to millions of poor Americans.