The GOP Needs to Stop Being Anti-Government 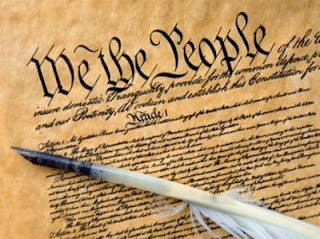 The far right base of the Republican Party views government as an evil and would dismember it - at least until they suddenly find themselves needing its programs such as social security and Medicare.  And in the process of dismantling government these people care nothing for the fact that (i) there are some functions that only government can do and (ii) countless people would be thrown on the trash heap if programs were cut so that the greed of the far right could be satisfied.  The latter result underscores that for all the religiosity of the Christofascists, they are anything by followers of the Gospel message.  Instead, they are modern day Pharisees of the worse ilk.  Moreover, as a piece in the Washington Post by a conservative writer points out, their agenda is NOT consistent with what the Founding Fathers envisioned.  Here are column highlights:

A political backlash has commenced within the Republican Party against tea party and libertarian groups that have limited interest in securing Republican victories and majorities. Elected leaders, party officials and business groups have begun pushing back against self-destructive legislative strategies and unelectable primary candidates.

But the GOP’s political reaction often concedes a great deal of ideological ground to anti-government populism — what its advocates describe as “constitutionalism.”

This cedes too much. In a new essay in National Affairs, “A Conservative Vision of Government,” Pete Wehner and I argue that the identification of constitutionalism with an anti-government ideology is not only politically toxic; it is historically and philosophically mistaken.

It is not enough to praise America’s Founders; it is necessary to listen to them. The Federalist Founders did not view government as a necessary evil. They referred to the “imbecility” of a weak federal government (in the form of the Articles of Confederation) compared to a relatively strong central government, which is what the Constitution actually created. Though they feared the concentration of too much power in one branch of government, they believed that good government was essential to promote what they called the “public good.”

And they assumed that the content of the public good would shift over time. “Constitutions of civil government,” argued Alexander Hamilton in Federalist No. 34, “are not to be framed upon a calculation of existing exigencies, but upon a combination of these with the probable exigencies of ages. . . . Nothing, therefore, can be more fallacious than to infer the extent of any power, proper to be lodged in the national government, from an estimate of its immediate necessities. There ought to be a CAPACITY to provide for future contingencies as they may happen.”

In the tradition of the Federalist Founders, Abraham Lincoln believed the federal government should be capable of adjusting to changing circumstances and active in pursuit of national purposes. In his “Fragment on Government,” Lincoln described a number of matters requiring the “combined action” of government, including “public roads and highways, public schools, charities, pauperism” and “providing for the helpless young and afflicted.”

Conservatives naturally want to be seen as defenders of the Constitution. But “constitutional conservatives” need to recognize what both the Federalist Founders and Lincoln actually envisioned for the republic they respectively created and preserved. Far from being constrained by the political and economic arrangements of an 18th-century coastal, agrarian republic, the Founders fully expected the United States to spread across a continent, undergo economic and social change and emerge as a global actor. And they purposely designed a constitutional system that could accommodate such ambitions.

[T]hey placed few limits on the public policies that durable majorities might adopt in the future — leaving “a capacity to provide for future contingencies.”

In our time, durable majorities have endorsed the existence of Social Security and Medicare. These roles of government were not envisioned by the Founders. But they do not violate a principle of our system nor run counter to the prescient mind-set of the Founders.

The broad purposes of the modern state — promoting equal opportunity, providing for the poor and elderly — are valid within our constitutional order. But these roles are often carried out in antiquated, failing systems. The conservative challenge is to accept a commitment to the public good while providing a distinctly conservative vision of effective, modest, modern government.

But a shift in mind-set is first required among conservatives: thinking of government as a precious national institution in need of care and reform. This would honor the Founders. The real Founders.

Will this sound reasoning resonate with the far right?  Probably not since the mindset of the far right is based on greed, hate and clinging to writings of ignorant, uneducated Bronze Age herders who never could have imagined the modern world.  Those who embrace ignorance in a celebratory manner will never accept sound and rational reasoning. 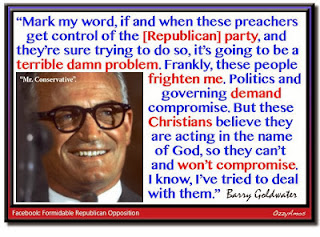