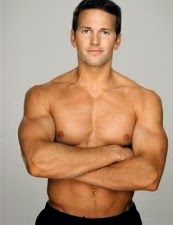 While some in the LGBT community disagree with me, I am strongly in favor of outing closeted Republicans who vote against LGBT people and our equality under the nation's civil laws.  That's why I assisted Michael Rogers in "outing" former GOP Congressman Ed Schrock (pictured at right) who represented Virginia's 2nd District.  Schrock had one of the most anti-gay voting records in Congress yet was secretly seeking gay trysts.  The hypocrisy was stunning.  Now, CBS anchor Itay Hod has seemingly "outed" Republican Congressman Aaron Schock on the grounds of hypocrisy as I did with Schrock (it's ironic that the names are so similar). Queerty has details.  Here are highlights:

In a long Facebook post, gay CBS anchor Itay Hod has essentially outed Republican Congressman Aaron Schock on the grounds of hypocrisy. While Hod frames the post as a hypothetical exploration of when outing is appropriate, he provides lots of details and concludes with an ostentatiously “unrelated” link to the 7 gayest Instagram Photos of Aaron Schock from 2013.

Hod is clearly fed up with Schock and perhaps just as much with his colleagues in the media who knowingly play along with closet cases.

what if you know a certain GOP congressman, let’s just say from Illinois, is gay… and you know this because one of your friends, a journalist for a reputable network, told you in no uncertain terms that he caught that GOP congressman and his male roommate in the shower… together. now they could have been good friends just trying to conserve water. but there’s more. what if this congressman has also been caught by tmz cameras trolling gay bars. now what if you know that this very same guy, the darling of the gop, has also voted against repeal of don’t ask don’t tell, opposed the repeal of doma, is against gay marriage; and for the federal marriage amendment, which would add language to the us constitution banning gay marriage and would likely strike down every gay rights law and ordinance in the country?

Are we still not allowed to out him?

let me ask another question… doesn’t the media have an OBLIGATION to expose his hypocrisy? if he had done something so hypocritical and he wasn’t gay, wouldn’t we demand journalists do their job? but they can’t… because we won’t let them. you’re not allowed to out ANYONE, we tell them.

Schock has long been the subject of rumors about his sexual orientation. He has always claimed he is straight (although his wardrobe is not). Schock didn’t boost his heterosexual cred any by posing for a series of shirtless images showing off his abs for Men’s Health.

Just to show he straight he is, Schock has accumulated an antigay record that ranks with the best of the homophobes. He has opposed marriage equality, protections for same-sex bi-national couples, and repealing Don’t Ask, Don’t Tell, just to name a few, earning him a stellar 0% rating from the Human Rights Campaign.

At the same time that he’s voting to deny the LGBT community its rights, Schock has, as AmericaBlog points out, created one of the gayest Instagram accounts ever. Although he follows only 71 people on Instagram, one of them is 19-year-old Olympic diver Tom Daley, presumably so that Schock can solicit his views on Midwest agricultural policy. Openly gay conservative Josh Barro tweeted that fact without comment. None is needed.

Personally, I hope the GOP base turns on Schock.  He deserves it.
Posted by Michael-in-Norfolk at Saturday, January 04, 2014