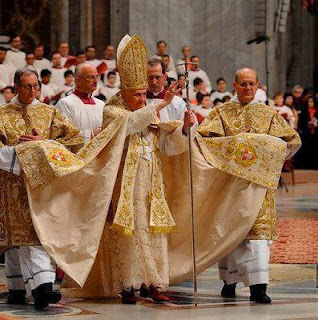 I have made the point several times that while Pope Francis has made nice sounding, conciliatory statements, the reality is that the Roman Catholic Church's position on gays, women in the Church, contraception and a host of other things has not changed.  A change in tone does not equate to a change in dogma or underlying positions.  This doesn't mean that Francis isn't a welcome change from the horrible Pope Benedict XVI.  It simply means that one cannot be deceived by nice sounding statements.  A piece in The New Republic underscores this reality.  Here are highlights:

Even if they themselves don’t believe a word of scripture, many liberals wish to see something of their own politics reflected in the outlook of the Catholic Church—hence the repeated references in recent weeks to the "progressive" Pope and the overrated idea of "liberation theology."

It is predictable that the reactionary politics of the new Pope should be played down by liberal Catholics in favour of his musings on social justice and global capitalism. What’s so depressing has been the extent to which liberal non-believers have fallen so hook, line and sinker for what is in reality nothing more than a clever repackaging exercise.

I say this because, apart from a few centrist musings about inequality, the Catholic Church—which Pope Francis heads and therefore has the power to change—stands on roughly the same political terrain as it did under the leadership of Pope Benedict. Pope Francis’s position on most issues should make the hair of every liberal curl. Instead we get article after article of saccharine from people who really should know better.

But as is so often the case, the search for a hero has resulted in people switching off their critical faculties and overlooking inconvenient truths which don’t align with their worldview. How else could the Pope come out of 2013 a "progressive" icon while at the same time holding views on women and abortion that make Jeremy Clarkson look like a radical socialist?

[T]he Pope’s popularity among the right-on surely has something to do with the fact that women and gay people are still viewed as appendages in the struggle for a better society. The new Pope has done nothing to fundamentally alter the Church’s bigoted stance on homosexuality. He has referred to gay marriage as "moral relativism." He presumably believes that men who sleep with men are going to hell. He views the all-male priesthood and the church’s prohibition of abortion as beyond debate.

[U]nder Francis little of substance has actually changed. The Catholic Church continues to vehemently discriminate against gay people and women, it’s simply sugar-coated its message with fashionable sound bites about inequality. And depressingly this has worked.

Aside from the fact that we still hold religious figures to a lower standard than secular ones, the fawning over Pope Francis demonstrates something profoundly depressing: in the struggle for a better world, women’s and LGBT rights are still not taken seriously.