The Theology of Christ's Penis 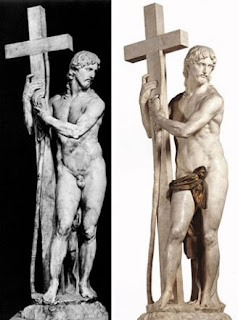 A piece in the New Yorker will no doubt drive leaders of the Southern Baptist Convention and sex obsessed far right Catholics to utter hysteria.  The topic?  The central fact of Christ’s penis in hundreds of Renaissance paintings.  The piece traces the tradition of depicting a naked Christ and later attempts to censor paintings as the Catholic Church became ever more obsessed with stamping out sex and sexuality.  I can only imagine that horror that Tony Perkins, Linda Harvey, Maggie Gallagher and similar modern day Puritans (and modern day Pharisees) must have at the thought of Christ as a man with man parts!  The article, while serious, is way too much fun.  Here are excerpts from the piece:

Thirty years ago, the art scholar Leo Steinberg published “The Sexuality of Christ in Renaissance Art and in Modern Oblivion,” a book that does much to explain the connection between Pope Francis’s passionate devotion to the poor and afflicted and his seeming openness to gay Catholics. In “The Sexuality of Christ,” Steinberg argues that as a result of the rise of the Franciscan order, around 1260, an emphasis on Christ’s nakedness, and, thus, on his humanity, joined compassion to an acceptance of the role of sexuality in human life.

[T]he Franciscans made Christ’s nude body a focal point. As a result, according to Steinberg, from about the middle of the thirteenth century until the sixteenth century artists lavished particular care on Christ’s penis, the part of Christ’s body that made him most mortal, and which proved his union with humankind.

The “modern oblivion” of Steinberg’s subtitle was just that: centuries during which the central fact of Christ’s phallus in hundreds of Renaissance paintings was overlooked, denied, and, sometimes, bowdlerized. Steinberg adduces several examples of Christ’s genitalia being painted over or touched up to make them look like a mere blur. . . . . Such censorship, Steinberg believes, was meant as distraction from an uncomfortable theological premise: “A disturbing connection of godhead with sexuality.”

To bring to the surface this suppressed artistic trend, Steinberg reproduced dozens of paintings and drawings in which Christ’s genitalia are indisputably a central thematic concern. There are paintings of the Christ child touching his penis, and of the Virgin handling the infant Christ’s penis. In some pictures, the Christ child exhibits his genitals in a style similar to Venus displaying her sex. “Again and again,” Steinberg writes, “we see the young God-man parading his nakedness, or even flaunting his sex in ways normally reserved for female enticements.”

Depictions of Christ on the cross and of the dead Christ lying in the Virgin’s arms clearly portray Christ with an erection. In some images, which Steinberg calls “psychologically troubling,” the divine Father touches his Son’s penis, “a conciliation,” Steinberg writes, “which stands for the atonement, the being-at-one, of man and God. For this atonement, on which hinges the Christian hope of salvation, Northern Renaissance art found the painfully intimate metaphor of the Father’s hand on the groin of the Son, breaching a universal taboo as the fittest symbol of reconcilement.”

For Steinberg, however, theological motives were preëminent. He held that artists used the evidence of Christ’s genitals to prove that Christ submitted to becoming human before returning to the godhead.

The skeptical response to Steinberg’s thesis was that the attention paid to Christ’s penis was merely the consequence of Renaissance naturalism. Steinberg had a convincing set of rejoinders: No children in actual life have been known to receive powerful kings shortly after their birth while smiling benignly and proudly displaying their genitals. It is not a medical fact that dying men experience an erection in the moment of their decease. And even if the emphasis on Christ’s penis in Renaissance painting were the product of fidelity to real life, Christ was no ordinary man.


Pope Francis could well agree with Steinberg, who lamented that the human Christ disappeared “as modern Christianity distanced itself from its mythic roots; as the person of Jesus was refined into all doctrine and message, the kerygma of a Christianity without Christ.” That, Steinberg says, was when “the exposure of Christ’s genitalia became merely impudent.” One might add that in our own epoch the Catholic Church’s denial of Christ’s sexuality runs parallel to its denial of human sexuality, taboos that resurface in once scandal after another.

In modern times, the Catholic Church has been under siege to an unprecedented degree, as much by internal rifts and abuses as by unbelief and competing Protestant sects. In response, its doctrine and its message have become all the more abstract and inflexible; all the more a Christianity without Christ. The current Pope, by heeding the call to “follow naked the naked Christ,” seems determined to make inseparable the alliance between the naked body that lives, works, suffers, and dies, and the naked body that was created with the capacity to experience physical love. If this is so, then Pope Francis has an ally in Leo Steinberg, the displaced Russian Jew whose modernist, heretical instincts led him to the grave, beautiful, profound, and, at times, playful depiction of Christ’s sexuality.

Yep, the One Million Bitches Moms crowd and the Catholic Leagues William Donohue cannot be happy with this historic reality.  I guess they will now be seeking boycotts of Renaissance Art. 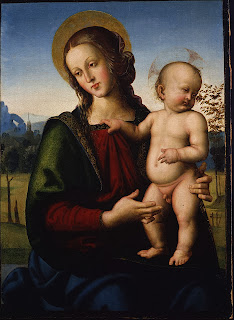 Posted by Michael-in-Norfolk at Sunday, December 29, 2013

Prior to reading this article, I had given this no thought. When Jesus' weenie is displayed in a work of art, is it typically circumcised as the living Jesus' most assuredly would have been?