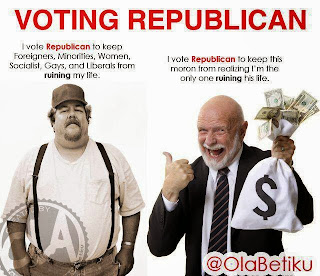 One of the main goals of this blog is to expose hypocrisy, particularly in the political realm and in the realm of religion.  Both areas provide plenty of topics for review.  And in the political realm, the Republican Party provides an endless stream of rank hypocrisy, including its claimed honoring of Christian values even as it pursues policies diametrically the opposite of the Gospel message.  A piece in The Daily Beast looks at the GOP's hypocrisy on job creation.  Here are some highlights:

I bring good news this new year! Conservatives have a jobs agenda, one that isn’t built around merely cutting taxes and regulations and getting the government out of the way so the free market can strut its stuff.

No—this includes… are you ready?… infrastructure investment, and a monetary policy less obsessed with keeping inflation under 2 percent. It’s new, it’s exhilarating, it’s brilliant! And it’s the same stuff that Barack Obama and most liberal Democrats have favored for years.

When David Frum, whom I respect a great deal, tweets that a new article should be thought of as “a ‘95 theses’ moment for the reformist right,” he gets my attention. So I clicked immediately and read through “A Jobs Agenda for the Right,” by Michael Strain of the American Enterprise Institute, from the new issue of National Affairs.

[R]reading it was far more infuriating than reading something by a conservative and disagreeing with every syllable, because articles like Strain’s refuse to acknowledge, let alone try to grapple with, the central and indisputable fact that the contemporary Republican Party—his presumed vehicle for all this pro-jobs reform—has opposed many of these initiatives tooth and nail.

The first big measure Strain touts in his essay is infrastructure. . . . There are people who’ve been trying to do just that. . . . . Their attempts to fund a modest infrastructure bank were supported by the U.S. Chamber of Commerce. But it could never get anywhere because of rock-solid GOP opposition. Does Strain not even know this? Or is he pretending it never existed so he doesn’t have to deal with the political reality of Republican obduracy?

From there, Strain turns to monetary policy, and this is even more comic. The Federal Reserve, he writes, should relax the 2 percent inflation target to get the unemployment numbers down. Uh, yes. It should. But it’s not as if Strain just originally thought of this. Liberals have been saying this ever since 2009, or 2008 even. And in response, conservatives have been saying that doing so will produce galloping inflation and destroy our economy. You’ve seen Ben Bernanke get badgered about inflation by Republicans from Paul Ryan on down for years.

As I said, I agree with Strain. I agree when he writes: “In short, conservatives should see that there is a role for macroeconomic stimulus in getting the labor market back on its feet” and that “monetary policy with its eye on enabling growth can make a big difference.” Yes, they should. Well… how are they going to see that? Does Strain have some special pixie dust?

It’s astonishing that he can write this way, but it’s what they all do on the right. They maintain the fiction that their party is a party of rational people who will listen to rational argument and isn’t simply dug into a state of psychotic opposition to anything Barack Obama wants to do. Everyone watching our politics for the last five years knows that if Obama is for it, the Republicans will oppose it.

[W]ith regard to jobs and wage stagnation and poverty and so on, the problem is that conservatives deny empirical reality. This gives us people like Paul Ryan, for example, who genuinely seems to believe, in the face of the mountains of evidence about how the social safety net and federal entitlements have saved millions from lives of far worse destitution, that all government can do is make slaves of people. That’s bad enough.

But now, we have conservatives who accept enough empirical reality to agree that public investment is not a crime against nature, but who deny the political reality that the Republican Party stands in the way of progress.

If conservative intellectuals keep pretending this isn’t a problem, there is no hope that it will change.