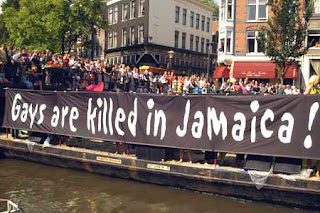 This blog has noted in the past the efforts of American Christofascist to export anti-gay animus and homophobia to Africa even as they are losing the culture wars in America.  But Africa is not the only target of this vile, toxic export effort.  Jamaica - which has a horrible history of homophobia and violence against gays - is also a favorite target, particularly as debate has begun in Jamaica.  Hence the recent visit by Brian Camenker, the founder of MassResistance, a registered hate group that knows few limits to the anti-gay lies and untruths it disseminates.  Not surprisingly, MassResistance supports discredited "ex-gay" ministries and "reparative therapy."   BuzzFeed looks at this effort to prey on citizens of a disadvantaged nation.  Here are highlights:

An anti-gay activist from Massachusetts has warned Jamaicans that repealing the country’s sodomy provision would end freedom of speech and lead to a surge of sexually transmitted diseases during a rally in Kingston.

Brian Camenker, founder of MassResistance, was the keynote speaker at an event organized by the Jamaican Coalition for a Healthy Society in the Jamaican capital’s Emancipation Park on Dec. 10. The organization has led a campaign to preserve the sodomy provision — known locally as the “buggery law” — following Prime Minister Portia Simpson-Miller’s suggestion just before her 2011 election that she might allow a vote on its repeal.

“I am here to warn you that [repeal of the buggery law] will have terrible consequences,” Camenker said, according to a video of the event uploaded by MassResistance on Saturday. “A law that contradicts God’s law is the beginning of a slippery slope that you cannot imagine.”

MassResistance is considered a hate group by the Southern Poverty Law Center, and Camenker has previously accused LGBT activists of borrowing techniques from the Nazis and imposing laws reminiscent of Jim Crow segregation.


What about kids who are sexually molested early on and as a result have homosexual or crossdressing feelings. Suppose they want help and counseling to deal with those issues. The radical homosexual movement will have none of that. They’re saying that kids shouldn’t be allowed to get counseling or help because, they say, the kids are really quote born that way and that homosexuality is natural and normal…. It’s a horrible thing to do to helpless kids, but it’s part of the radical political agenda that started with legalizing the behavior.

Camenker also refuted the notion that homophobia was the main cause of violence against LGBT people.
Camenker described a series of events that he said flowed from the decriminalization of sodomy in Massachusetts, including the “indoctrination” of children in schools and the suppression of religious people opposed to LGBT rights.

Camenker’s appearance followed a by another American anti-gay activist, Peter LaBarbera, at a conference organized by the Jamaican Coalition for a Healthy Society on Dec. 7. LaBarbera appeared alongside the British activist Andrea Minichiello Williams, and both argued that homosexuality was a choice and linked to pedophilia.