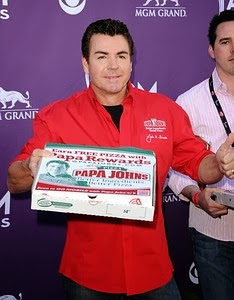 The Republican Party wants to bring back the Gilded Age and the harsh conditions faced by the majority of workers.  Some employers seemingly are all on board for such a step backwards in time, including the CEO's of Papa John's and Applebee's who stated that they would cut workers' hours rather than comply with the mandates of the Affordable Health Care Act, a/k/a Obamacare.  Unbeknown to these Scrooge like individuals, much of the public found their miserliness disgusting and voted with their feet and/or wallets.  The result?  Both Pappa John's, Applebee's and similar anti-worker employers saw their bottom lines severely damaged.  Karma can indeed be a bitch.  (NOTE: Walmart still plans to slash employees' hours - one of the reasons I never shop at Walmart). Here are highlights from Forbes:

It turns out that being a good corporate citizen is as important to selling pizzas as the thinness of the crust or the quality of the cheese.

If you don’t believe it, just ask Papa John CEO, John Schnatter.  As covered—and criticized—in this column in great detail, Mr. Schnatter decided to mix his politics with his pepperoni when suggesting that he would be cutting the work hours for Papa John employees in order to bring them below the 30 hour per week threshold that would require Schnatter to provide his employees with healthcare benefits.

It turns out, the pizza eating public did not approve.  Indeed, so serious was the reaction that Schnatter was forced to publish an op-ed piece where he sought to convince us that he never really intended to cut back worker hours but had simply been speculating on what he might do in response to the legislation.

According to YouGov BrandIndex,  a leading marketing survey that measures brand perception in the marketplace (called “Buzz”), Papa John’s had good reason for concern as the pizza chain’s brand identity has plummeted from a high of 32 on election day, to a remarkably low score of 4 among adults who have eaten at causal dining restaurants during the past month.  Ouch.

Papa John is not alone in his anti-Obamacare misery.  Fast food server, Applebee’s, possessed a healthy Buzz score of 35 before Zane Terkel, CEO of one of the company’s largest franchisees, appeared on television to complain about the law and to announce that he would not be building more restaurants or hiring any more workers in response to his objections to Obamacare.  Applebee’s “pre-Terkel” Buzz score of 35 now sits at a pathetic 5.

[O]ne  . . . company is facing the music straight on. Darden Restaurants, Inc.— owner of Olive Garden, Red Lobster and LongHorn Steakhouse—has lowered its profit projections for the quarter ending November 25th, acknowledging that its bad numbers are the result of poorly performing  promotions, Superstorm Sandy and…wait for it…the poor publicity it engendered by its decision to test out a plan to cut back on healthcare costs by putting more workers on part-time schedules.

Hopefully, other businesses seeking to avoid their responsibilities under the healthcare law—such as Walmart who intends to cut back employee hours in the effort to push workers onto Medicaid rolls rather than take responsibility for their employees’ health care—will get the message.

Perhaps there is a God after all!  I for one am thrilled that these nasty, greed motivated business owners have received a strong rebuke from consumers.