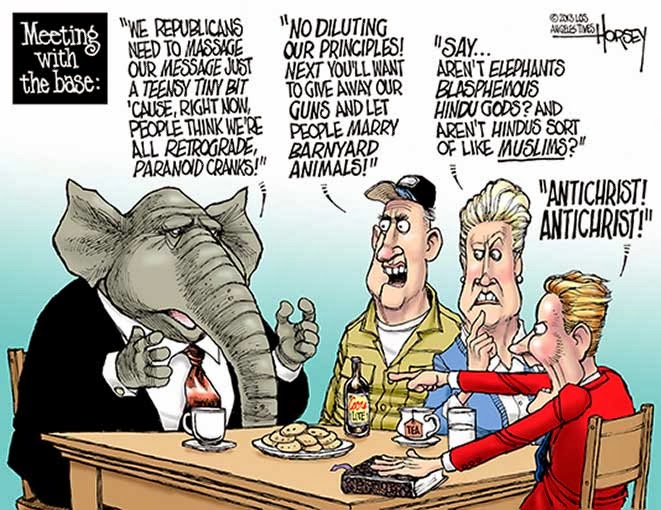 I've already looked at the troubling increase in the percentage of Republicans who do not accept the theory of evolution.  As noted, much of the increase may be the result of the rise of the Christofascists within the GOP and the current flight of moderates and sane individuals from the GOP - e.g., all of my family has fled the GOP.  But there has been a troubling pandering to the ignorance embracing element of the GOP by those who should have known better.  The motivation? Short term gain by mobilizing the ignorant and religious extremists.  The longer term result has been, as noted, the exodus from sane and educated people from the party and the now ongoing civil war for the soul of the GOP.  A piece in the New York Times looks at the growing ignorance of the GOP and the use of religion to win allegiance to the party.  Here are excerpts:

In 2009, the gap between the share of Republicans and Democrats who believed in evolution was just 10 percentage points, 54 percent and 64 percent, respectively.

This sad news comes via a survey released this week by the Pew Research Center’s Religion & Public Life Project.

In fact, this isn’t only sad; it’s embarrassing.  I don’t personally have a problem with religious faith, even in the extreme, as long as it doesn’t supersede science and it’s not used to impose outdated mores on others.

But I believe that something else is also at play here, something more cynical. I believe this is a natural result of a long-running ploy by Republican party leaders to play on the most base convictions of conservative voters in order to solidify their support. Convince people that they’re fighting a religious war for religious freedom, a war in which passion and devotion are one’s weapons against doubt and confusion, and you make loyal soldiers.

There has been anti-science propagandizing running unchecked on the right for years, from anti-gay-equality misinformation to climate change denials.

Pew found that most staunch conservatives were regular viewers of Fox News, preferring the network to any other news source.  Fox has helped to ingrain the idea that Republicanism and religiosity are embattled and oppressed, fighting for survival against the forces of secular extremists.

But Fox is not alone. The Christians-on-the-defensive stance was front and center in the 2012 Republican presidential primaries.

Last year, the Liberty Institute and the Family Research Council released an updated, 189-page version of a book called “Undeniable: The Survey of Hostility to Religion in America.”

This is a tactic to keep the Republican rank-and-file riled up, to divert their attention from areas of common sense and the common good. After all, infidels are deserving of your enmity, not your empathy.