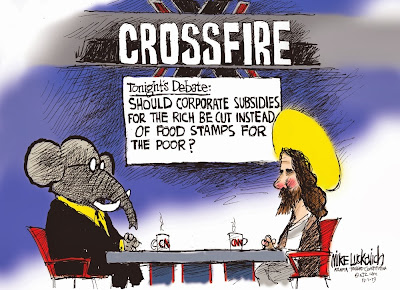 At times I have nothing but disgust for the main stream media which seems like either the lap dog of big business or some larger version of the National Inquirer which focuses on petty and unimportant stories while ignoring real significant problems.   Right now, two huge under reported problems in America - of GOP creation, I might add - are the 1 million plus unemployed workers losing emergency unemployment benefits and the related number of the working poor who remain without health care coverage.  The Gospels stress the need to care for the poor, sick and hungry, yet today's self-congratulatory folks in the Republican Party deem the poor, sick and the hungry only worthy of society's trash heap.  A column in the Washington Post looks at these stories largely ignored by the media.  Here are excerpts:

As The Post’s Brad Plumer expertly outlined on Friday, there are 4 million people who have been out of work for 27 weeks or longer, translating to the highest long-term unemployment rate since World War II. These people — young, old and from all kinds of demographics — have a 12 percent chance of finding a job in any given month, and, contrary to the theories of Rand Paul Republicans, there’s little evidence that they’re more likely to find work after losing benefits. Cutting off their benefits only causes more suffering for them and more damage to the economy.

Also last weekend, the Obama administration reported that 1.1 million people had signed up online for coverage under the new health-care law. That’s a dramatic acceleration in enrollment, but it also leaves uninsured millions of people who are eligible for coverage. Some of them are working poor in states where Republican governors have refused to implement the law’s Medicaid expansion, and many more are being discouraged from enrolling by Republicans’ incessant opposition. This month’s CBS News-New York Times poll found that a majority of uninsured Americans disapprove of the new law, even though nearly six in 10 of the uninsured think insurance would improve their health.

These real outrages make the Christmas-week controversies seem like tinsel.

Bad things happen because good people stand by and do nothing - and because the media fails to report on stories that need to be told while focusing on matters more appropriately the a topic for Entertainment Tonight.  We once had a responsible main stream media, but those days are seemingly over.  It is part and parcel with the dumbing down of America.
Posted by Michael-in-Norfolk at Tuesday, December 31, 2013